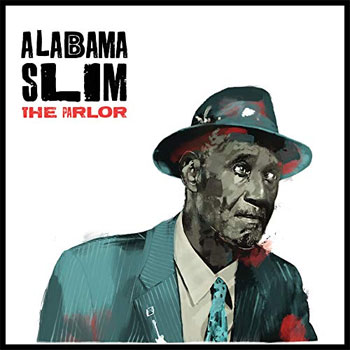 When key rock musicians acknowledged their debt to blues figures in the 1960s, many of those bluesmen found themselves with a new and younger audience. Their belated wider recognition came just in time, as many were well into their middle years or beyond. Now, a half century later, most all of the blues giants have long since left this world. Current-day genuine exponents of real-deal blues are rightly admired, but every once in a while, an artist surfaces seemingly fully-formed, causing listeners to wonder where they have been all this time. It’s especially extraordinary when those musicians are into their later years when they’re first “discovered.”

Alabama Slim (born Milton Frazier) is already into his 80s. His first release, 2007’s The Mighty Flood, was released by the Music Maker Relief Foundation. He was featured on the label’s Blue Muse compilation in 2019, and in a companion book of the same name. His latest release, The Parlor, is a loping, laid back set that recalls John Lee Hooker in its character and musical approach

With a spare ensemble – bassist Matt Patton (Drive-By Truckers), drummer Ardie Dean, Squirrel Nut Zippers founder Jimbo Mathus on piano and organ plus guitarist Little Freddie King – Slim brings a spontaneous, extemporaneous feel to the ten tracks on The Parlor. That feel is a result of the manner in which the record was made: a four-hour session featuring Slim, King and Dean yielded the basic tracks, and a later overdub session by Mathus and Patton added subtle touches of bass and keyboards; their work enhances – but never competes with or overshadows – the guitars and vocals.

“Rock With Me Momma” is a representative track. While it may recall any number of classic blues sides, one gets the sense that Slim wouldn’t sing or play the song the same way twice. The interplay between King and Slim never feels forced; The Parlor isn’t a cutting session. The two spin out complementary melodic lines on their electric guitars, and the end result feels like a conversation. The two guitarists might “talk” over each other at times, but there’s a warm, friendly and comfortable feeling that makes plain that there’s plenty of space for both to put their messages across.

As appealing as Slim’s singing voice can be, the most intriguing cut on The Parlor is “Forty Jive.” More spoken than sung, the tune is an acerbic commentary on a certain television personality whose exit from the world stage can’t come soon enough for Slim: “What a party when the righteous take him down / Undertaker, you’ll have to screw him into the ground.”

That sociopolitical piece aside, most of The Parlor concerns itself with more traditional subject matter. The titles tell the story: “Hot Foot,” “All Night Long,” “Someday Baby” and so on. The live-in-the-studio approach employed by the album’s producers (drummer Dean with Music Maker Relief Foundation’s Tim and Denise Duffy) strikes just the right tone; The Parlor may have been recorded in 2019, but it’s a timeless collection.