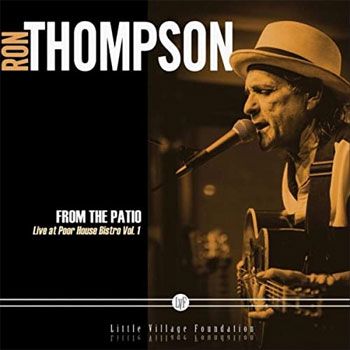 For more than a decade, guitarist Ron Thompson was a regular fixture at San Jose, California’s famed Poor House Bistro. As this album’s brief liner note essay by the club’s owner Jay Meduri points out, Thompson could always be counted on to show up for Wednesday night gigs. Selections from two of those Wednesdays – June 4 and August 6, 2014 – have been compiled as From the Patio: Live at Poor House Bistro Vol. 1.

For these live cuts, Thompson was backed by a solid core of musicians: Scotty Griffin on drums, pianist Sid Morris and organist Jim Pugh. Bass duties were held down on one date by Dave Chavez, by Gary Rosen on the other. Gary Smith played blues harp on one track, and West Coast blues stalwart Kid Andersen is featured on two cuts.

But in the end, it’s Thompson’s show. His lived-in vocals and searing slide guitar work are at the center of these performances. Whether he’s delivering an original (like the familiar melody of “Mardis Gras Boogie”) or a blues classic like Willie Dixon’s “Meet Me in the Bottom,” Thompson commands the stage.

And Thompson explores beyond what some might consider the boundaries of the blues form: a highlight of From the Patio is a reading of the Don Covay/Bobby Womack “That’s How I Feel” (alternately known as “That’s How it Feels”). Thompson coveys the deep soul of the original, bending it into a blues arrangement yet staying true to the composers’ intent.

Equally tasty is a cover of Guitar Slim’s “I Done Got Over It,” with a stomping feel that evokes memories of classic early electric blues. Thompson is clearly comfortable running through these tunes; they’re second nature to him. But he always leans into the material; nothing ever sounds perfunctory or dashed-off.

Thompson steps back for Pugh to lay down a hypnotic, languorous organ solo on “Sinner’s Prayer,” a tune written by Lowell Fulson and previously covered by Eric Clapton on his From the Cradle album. And Andersen’s six-string work is showcased on both Buster Brown’s blues nugget “Doctor Brown” and the Thompson original “When You Walk That Walk,” two of the strongest cuts on the collection.

The recording itself strikes a balance between the clean quality of the studio and the cracking, intimate vibe of a live onstage gig. The performances themselves are assured yet relaxed, the sound of a man who doesn’t feel the need to showboat or pander to his audience.

Thompson dealt with health problems through much of his life, and he passed away earlier in 2000 at age 66. His recorded legacy isn’t very deep, but as documented here, the intensity and integrity of his live performances capture Thompson at his best. Little Village Foundation’s posthumous From the Patio is as fine a tribute to the man and his artistry as can be hoped for.