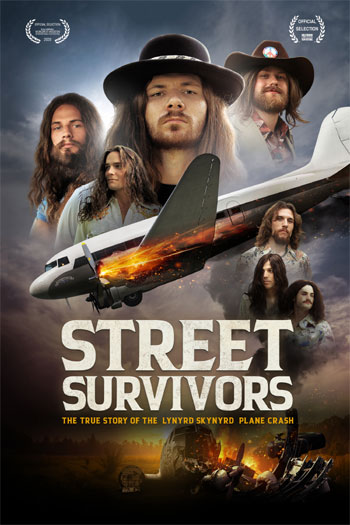 The history of rock music is littered with tragic tales of disaster and death. Chief among those is the 1977 plane crash that killed two members of Lynyrd Skynyrd as well as a backing vocalist, the band’s assistant road manger and the two-man flight crew. At the time of the tragedy, the group was at its peak: its latest album, Street Survivors had been released only three days prior. It went gold immediately.

Street Survivors: The True Story of the Lynyrd Skynyrd Plane Crash is a hybrid of a dramatized depiction of the story and a first-person narrative courtesy of the band’s drummer Artimus Pyle. But the two styles don’t always mesh seamlessly.

The film itself has a tortured history. In light of a U.S. District Court judge’s ruling, production was halted in 2017. Former members of the group (as well as their families) had initiated proceedings against the production company, citing a “blood oath” to never trade on the Lynyrd Skynyrd band name for profit. In 2018 an appeals court reversed the decision. The film – loosely based on Pyle’s book about the event – threads a legal needle by making the movie more about Pyle than the band.

And that emphasis brings problems. The film is wholly bereft of subtlety as it paints a portrait of Pyle as half hippie, half boy scout. He doesn’t eat meat, stops bouncers from roughing up a drunken fan, apologizes when he collides with a stranger in a hallway, and he doesn’t take drugs (“that’s ginseng,” his actor alter ego tells a cartoonishly over-earnest DEA agent). One suspects that scenes of Pyle helping an old lady across the street or rescuing a kitten from a tree didn’t make the final cut.

Inviting more skepticism, the filmmakers shore up Pyle’s heroic bonafides by erasing from the narrative two other survivors who made the post-crash journey alongside him to get help. And in what was likely both a cost-saving and aesthetic move, Pyle’s nighttime journey takes place instead in broad daylight.

The storytelling sometimes feels amateurish and heavy-handed. Even though it’s established fact that Aerosmith’s manager had previously passed on using the Convair CV-240 because of safety issues, the corresponding flashback scene is so blatantly expository that the actor may as well have broken character, stared into the camera and said, “Wait until you see what happens now!”

In the film, Pyle’s character argues on the phone with an uncaring label executive he repeatedly calls “Peter.” Fair enough: Peter Rudge was Lynyrd Skynyrd’s manager, and IMDB.com notes actor Joe O‘Dell as portraying him in the film. But the movie’s end credits identify the character instead as Mike Maitland, then head of MCA Records. It’s a curious discrepancy that leaves one wondering if even more lawsuits – or threats thereof – had a hand in matters.

Still, Street Survivors does deserve praise for its look, design and overall production values. The decadent mid ’70s feel is captured perfectly, right down to the hair, clothing, drug use, topless groupies and drunken violence. And while it doesn’t make for pleasant viewing, the gory carnage of the plane wreck and its aftermath is viscerally realistic as well.

As a dramatic telling of the tragedy, Street Survivors is marred by cliché dialog, clumsy construction and lack of subtlety and nuance, but its visual realism and production values go a long way toward redeeming it. Approached with skepticism, it can be worthwhile viewing.