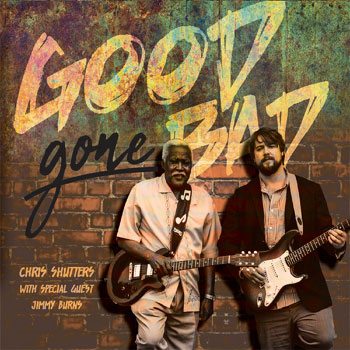 Still in his 30s, Ohio guitarist Chris Shutters has already made a name for himself. After winning a series of blues and singer-songwriter competitions, he released his solo debut, A World Apart, in 2009. In 2013 he recorded and released a follow-up, Laugh and Roll the Moon. He’s toured with Ginger Baker’s son Kofi Baker on “The Music of Cream” tours, appearing on Baker’s 2016 album Live in Bremen. Baker is in His latest release, Good Gone Bad, is the culmination of a friendship and musical association that began nearly ten years ago.

Jimmy Burns is a blues and soul guitarist born the Mississippi Delta; he established himself as a musician in Chicago. After some minor success in the ’60s, he left music for an extended period, returning in the ’90s with a residency at the Smoke Daddy Club in Chicago’s Wicker Park neighborhood. There he came to the attention of Delmark Records’ Bob Koester; to date Burns has released five albums for the label; 2015’s It Ain’t Right is his latest.

Good Gone Bad is a true collaboration in every sense of the word. While much of what passes for collaborative recording today entails flown-in WAV files compiled with no actual face-to-face interaction among the musicians, this album features both musicians singing, playing guitar and writing material. Seven of the record’s cuts are Shutters originals; three are penned by Burns.

Tried-and-true is a tidy description for many of the songs on this album. Burns’ I-IV-V blues “Stop the Train” is essentially a laid-back retread of Robert Johnson’s “Crossroads Blues” with new lyrics and a tasty lead guitar break.

But there’s a playful sense of fun that shines through the tracks. A fine example is Shutters’ “Can’t Play the Blues Like B.B.,” a tune that succeeds precisely by not trying to ape King’s style. The rhythm and blues texture of Burns’ “Miss Annie Lou” may remind some listeners of Lloyd Price; it underscores that fact that his stylistic scope is wider than the strict blues idiom.

The bouncy lead guitar lick that forms the backbone of Shutters’ “Unwind” bears a stylistic similarity to both Eric Clapton (in its vocals) and Eric Johnson (in the song’s deft arrangement). A catchy chorus seals the deal, and an instrumental break featuring a saxophone-guitar duel is the icing on the cake.

Like most every blues album that seeks to display a wide range, Good Gone Bad features an acoustic-based, “Red House” styled blues. In this case that slot is filled by “Poor Boy Blue,” a cut written by Shutters but sung by Burns. It’s followed by a blazing “Living in a Dream” a supercharged, wah-wah laden blues that owes debts to Stevie Ray Vaughan, Joe Satriani and Jimi Hendrix. The track also features the album’s most kinetic bass guitar work.

Jimmy Burns takes an Albert King-flavored lead vocal on Shutters’ “Keep You Satisfied.” While all ten of the album’s tracks succeed in their own ways, this song is the most effective fusing of the two musicians’ talents.