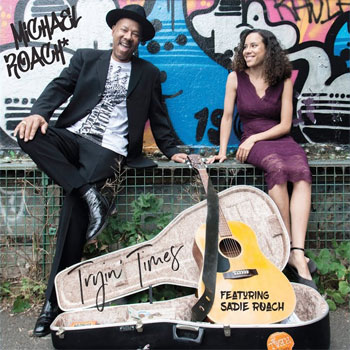 The album opens with a loping, country-blues feel, with just a single guitar. But like a curtain slowly being drawn back to reveal the musicians onstage, the arrangement builds, adding instrumentation and vocal until the net effect is a full band. By the second verse of the title track – a cover of Donny Hathway’s song – the tune chugs along sounding quite a bit like how The Band might have done it. Roach sings expressively and plays guitar, but the centerpiece of the whole affair is his daughter, Sadie Roach. Currently a student at London’s Guildhall School of Music and Drama, Ms. Roach is a fluid and soulful pianist expressive and Roach, and she’s a solid vocalist as well. Her vocal turn on Lead Belly’s “Take This Hammer” is a delight.

Once those two fine tracks are out of the way, most of the remainder of Tryin’ Times is given over to original songs by Michael Roach. “I’m Not Stepin” [sic] has a New Orleans second line feel; Roach seems to be singing-talking extemporaneously. The loose arrangement fits with its desired aesthetic, but one is left thinking the song works better in a live setting than on an album. Featuring only the singer-guitarist, some very understated bass and brushes on a drum head, the spare country blues of “Casper” is infinitely more effective.

Tryin’ Times is nothing if not eclectic. Gypsy jazz-style fiddle (courtesy Ben Holder) adorns the bouncy “A Vote for Me,” with another spotlight vocal from Sadie Roach. Though it’s credited as an original, the brief “You Can’t Come Round Here” sounds for all the world like a Public Domain song, and the gospel-meets-field-holler backing vocals only reinforce that feeling.

Just when the listener has settled in to thinking they know what kind of an album Tryin’ Times is, Roach changes things up again, delivering a warm and friendly pop-blues number; “Hey, Mr. Basketball” could be a Darius Rucker song. And Roach seems to be leaning in a subtly topical direction with “Taking a Knee,” a homespun tune with a weedy vocal by his 12-year-old son Lonnie; unfortunately, here the guest spot concept works better in theory than in execution.

The track “NEGRO” (yes, all caps) is an uptempo song that unexpectedly ranks among the record’s most inviting tunes. Its singalong spelling of the word draws the listener in, a sly way of getting a lyrical message across in a way that feels especially inclusive. “A Good Time” swings, and allows the young Ms. Roach yet another well-deserved opportunity to display her talents. She easily earns a co-credit on the LP. Her dad’s lyrics reference several of the other tunes on the album.

The album concludes as it began, with a cover; this time it’s Sister Rosetta Tharpe’s “Strange Things Happening Everyday.” The arrangement – with another Sadie Roach lead vocal – emphasizes just how much the blues, gospel, country and rock ‘n’ roll have in common. This reading of the tune draws from all of those musical traditions; as such, it’s a fitting way to wrap up an album that covers a great deal of musical territory.