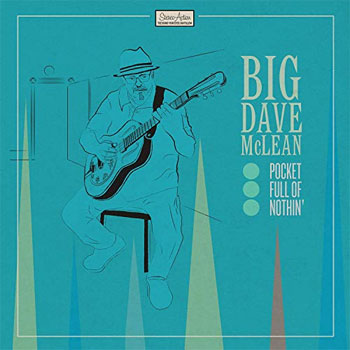 All of the ingredients required for a successful contemporary blues album are present on Pocket Full of Nothin’, the seventh album from Canadian-born singer-guitarist Big Dave McLean. There are plenty of soulful, beefy horns. There’s a tasty rhythm section. The Wurlitzer electric piano and organ textures hit just the right note. And McLean’s a fine musician. But there’s no way getting around the fact that his vocal delivery is – to put it diplomatically – an acquired taste. His lyrics are expressive and often clever, with wry turns of phrase and heartfelt messages. But without exception he seems to be struggling mightily.

To be fair, McLean sings in tune without fail. But spending time listening to him do so is a somewhat tiring experience. Producer-guitarist Steve Dawson is credited with vocals as well, but when he’s present, he’s pretty deep in the mix; vocally, it’s pretty much all McLean all the time.

And ultimately that takes away from the effectiveness of the music. McLean is a revered figure in his native Canada, recipient of many awards. And his instincts with regard to instrumentation and arrangement are beyond reproach. Songs like “Don’t Be Layin’ That Stuff On Me” are undeniably fun, and played with verve and spirit. And the New Orleans walking blues of “”Backwards Fool” is a delight. When McLean pulls out his blues harp on the latter tune, it’s a thing to behold. Yet when the singing starts, it’s tough going.

Four tracks in, it’s clear that things aren’t likely to change on the vocal front. So Pocket Full of Nothin’ is perhaps best considered by setting aside thoughts of the singing. That done, the album succeeds on the merits. The jump blues of “All Day Party” is made for dancing, and a sprightly piano solo from Chris Gestrin – supported by that crack horn section of Malcolm Aiken (trumpet), Jerry Cook (baritone sax) and Domine Conway (tenor sax) – really shines. The massed “party party” vocal shouts a la Louis Jordan are a nice touch, too.

The guitar figure that introduces “Voodoo Music” – one of nine original McLean tunes on this 12-cut record – seems lifted right off of The Champs’ “Tequila,” but the tune as a whole affects a suitably swampy bayou feel. The deliberate, stomping blues of “Just to Be With You” is unique on the record in that it’s well suited for McLean’s idiosyncratic vocal style. That only makes it a bit easier to take, though.

The storytelling “When I Was Young” is a delightful romp, with resonator guitar sparring with the horns. And “You’ve Been Told” has amusing lyrics. A cover of Gregg Allman’s classic “Midnight Rider” adds just enough changes to the original to make it a worthwhile excursion. But – despite a vocal chorus offering sympathetic support – McLean’s painfully strained vocal renders the tune a near disaster.