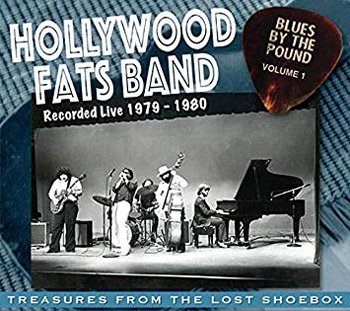 Hollywood Fats (Michael Mann) was a West Coast blues guitarist who died in 1986 at age 32; as the liner notes for Blues by the Pound Vol. 1 assert, he left this earth before earning the fame he deserved. Those uncredited liner notes do lay it on a bit thick, wanting readers to believe that Fats’ band of musicians “came into existence by virtue of a seemingly preordained, cosmic convergence.” Yeah, that, or maybe they met at Santa Ana, California’s Musicians Union Local 7.

Lofty and unnecessary hyperbole aside, this collection of live recordings does have appeal. As long as listeners can listen past the lo-fi audio quality – this is an archival/historical document, after all – they’re in for some tasty musical firepower. Uptempo and danceable, the tunes in the band’s set lean toward jump blues and swing. Fats is clearly the star of the show here, from the opening instrumental “Introduction” through to the final cut.

It certainly would have been nice if someone would have taken that heavy blanket off of the condenser mic inside the portable cassette deck that was almost certainly used to capture these performances. But the good-timing artistry of the band shines through the hiss and muffle. Fred Kaplan’s incendiary piano work on “Chicken Shack Boogie” is a treat, and his sparring with Fats is exciting stuff.

Fats/Mann explains in the lengthy opening to “Chicken Shack Boogie” that he’s “not a singer,” and the few examples here don’t put the lie to his admission. But his speak-singing channeling of Cab Calloway works just fine in this context, and most will come to this recording for the instrumental work, anyway. Blues harpist Al Blake does a fine job on his vocal turns, adding real feel to the set’s mix of standards and derivative originals.

The shrill, bootleg-grade sound and lazy editing (no fadeouts or crossfades of the tracks sourced from three venues) means that Blues by the Pound Vol. 1 is largely one for hardcore fans or scholars/aficionados of the late ’70s take on postwar electric blues. But for that subset of the blues listening public, there are indeed charms to be found here.