While she is popular the world over, contralto Diana Krall got off to a modest start. Her official debut release, 1993’s Stepping Out earned positive reviews, but it didn’t initially sell in large numbers. Yet that release did bring her to the attention of producer Tommy LiPuma. He produced her second album, Only Trust Your Heart. That album reached the #8 position on Billboard‘s jazz charts, and established pianist-vocalist Krall as a major talent. 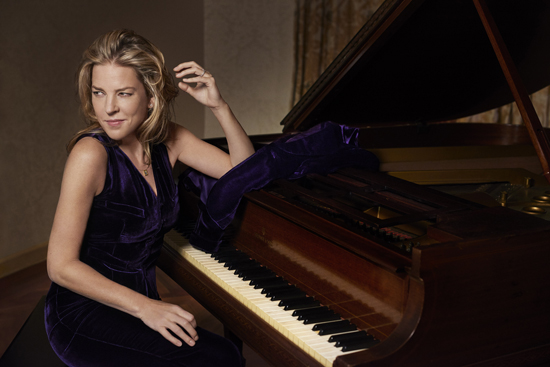 Krall’s stock in trade has been her inimitable readings of classic from the Great American Songbook, but she has long displayed a playful side as well: Only Trust Your Heart‘s opening track is Louis Jordan’s “Is You Is or Is You Ain’t My Baby.” Her third release, a tribute to the Nat King Cole Trio, earned ecstatic reviews, hitting #3 on the jazz album chart and going Gold (500,000 units sold). The success of that album spurred the first of several reissues of Stepping Out; it eventually went Gold in Krall’s native Canada (40,000 units).

With creative and commercial wind at her back, Krall continued on a roll; the dozen-plus albums she released subsequently have all been well-received. She has worked in a number of musical idioms, from a spare trio to arrangements featuring a full string orchestra. 2002’s Live in Paris is an effective document of her onstage power and skill at improvising both vocally and on the piano.

In 2004 Krall released The Girl in the Other Room, a collection of songs decidedly not from the world of jazz classics. For this record, she cut songs by Mose Allison, Tom Waits and Joni Mitchell. She also began writing her own material with co-composer (and new husband) Elvis Costello. 2005 saw the inevitable holiday-themed release, Christmas Songs. A second creative detour, 2012’s Glad Rag Doll found Krall working in ragtime jazz.

By 2017, Diana Krall seemed to have settled comfortably back into the world of standards; with tunes from the pens of Hart & Rodgers, Cole Porter, Johnny Mercer and Irving Berlin, Turn Up the Quiet is an understated and subtle highlight among her catalog. 2018’s Love is Here to Stay is a collection of twelve Gershwin tunes in duet with the legendary Tony Bennett. That album charted well in eleven countries, reaching the top spot on the U.S. jazz albums chart. Like love, Krall is here to stay.