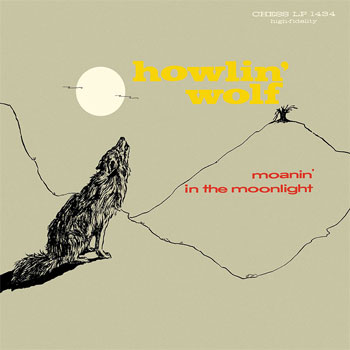 Though he had already been a performing musician for some two decades, Chester “Howlin’ Wolf” Burnett began his recording career in 1951, cutting sides for Sam Phillips in Memphis. By the next year he was under contract to Chess Records. As 1959 began, he had released no less than 22 singles. With the album era just over the horizon, Leonard Chess had the good sense to get out front with the the long-playing record format, and compiled Moanin’ in the Moonlight from the singles cut for his label.

Howlin’ Wolf’s first album is impressive in its variety. Owing at least in part to the varied circumstances of recording, the arrangements and performances showcase the breadth of the man’s stylistic palette. “No Place to Go (You Gonna Wreck My Life)” is positively hypnotic in its delivery, while the stinging electric approach of the hit single “How Many More Years” features the band stomping along with equal parts determined purpose and reckless abandon. “I Asked for Water (She Gave Me Gasoline)” is loose-limbed; All Night boogie” veers close to rock ‘n’ roll. The seminal “Smokestack Lightning” is the standout track, but none of the 12 cuts is anything short of immortal.

First-pressings of Howlin’ Wolf’s LP debut go for upward of $400 if one can even locate a copy. Happily, the brand-new reissue of Moanin’ in the Monlight is a near-total recreation of the original Chess LP and sleeve, right down to the record label and the cover art and text. Save for an unobtrusive UPC code on the back, it’s identical. And the inner sleeve features a nice full-color reproduction of the monaural master tape sleeve, with handwritten track notes that reveal that the 1952 a-side “The Wolf is At Your Door” was originally slated for inclusion on the album.

A similar 2011 repressing — also on 180-gram virgin vinyl — is difficult to locate; the last time Moanin’ was available on vinyl in the U.S. was 1986; although collectible, that release didn’t attempt to recreate the look and feel of the original classic. Geffen/UMe’s new pressing is the one to have.