More Lifting Up Than Crossing Over: Soprano Superstar Sarah Brightman

Sarah Brightman is one of the leading figures in classical vocal music today. Carefully maintaining the sophistication of the genre, Brightman has nonetheless managed to achieve superstar status; to date the soprano singer has sold more than 35 million albums; that figure doesn’t even include sales of 1987’s Phantom of the Opera cast soundtrack, responsible for an addition 40 million CDs sold.

With more than 180 Gold and Platinum records earned to date, it’s fair to wonder where Brightman stores all of those awards. “My long-term producer has them all in his home,” she says. “I’m very proud of my achievements and I feel very lucky, but I live very much in the moment and the future. So I don’t really collect things like that.” 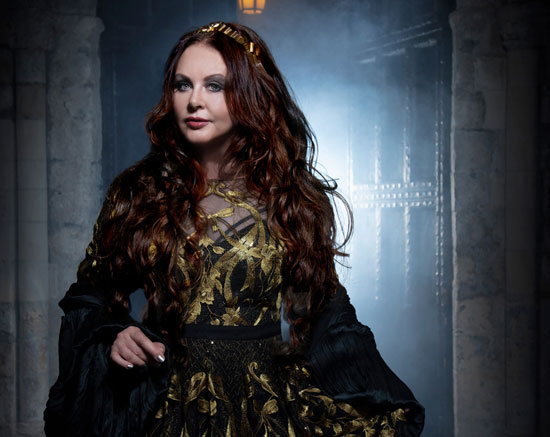 Brightman has previously expressed dislike for a label sometimes applied to her music: classical crossover. Asked about it now, she backpedals just a bit. “It’s not that I have anything against it,” she says. “I think it was a marketing term. At that time, the record companies had to find a place for pieces which they couldn’t necessarily put into the purest musical genre.” She notes that in years past, the classical crossover label was applied to film soundtracks, scores and hard-to-classify hybrid works by jazz artists. More recently it has come to represent artists such as her, Luciano Pavarotti and Andrea Bocelli.

“There’s nothing wrong with hybrids,” Brightman emphasizes. “Because that’s about the evolution that happens to things. So that’s where they put me, and some of the pieces by [operatic tenor Luciano] Pavarotti, and [Andrea] Bocelli; all of our kind of music, I suppose.”

She laughs and adds, “I don’t know really what [we’re supposed to be] crossing over from!”

To be fair, Sarah Brightman started out her professional career as a dancer and disco singer, soon moving on to stage work. But from her earliest days growing up just north of London, she was immersed in all kinds of music. “Back in the ‘60s in England, my mother always had the radio on. One minute you’d be listening to Tom Jones singing ‘What’s New, Pussycat?’ and the next it would be a piece by Rachmaninoff or something. So I got to be very eclectic in my taste in—and understanding of—many genres of music.”

Brightman was trained as a classical ballet dancer; that led to her developing a special affinity for classical music. “I started singing at a really young age; naturally, I could do it. I just knew what to do,” she says. “So just out of pure interest, it led me organically to the path I took.”

An avowed fan of rock acts like David Bowie and Pink Floyd, Brightman can’t easily pinpoint the ways in which their music has informed her own approach. “I can’t be specific, because music comes from all different areas,” she says. “You receive it as an artist, and then you just decide to go forward with something. Something completely different that I wouldn’t expect — maybe jazz or blues or whatever — might inspire me to do something, but it doesn’t really end up like that at all. So whether it’s pop music or other genres, it doesn’t really matter. I get inspired by all areas.”

While much of Brightman’s repertoire is sung in English, she has performed and recorded in French, German, Hindi, Italian, Japanese, Latin, Mandarin and Russian. “I prefer to do everything in my mother tongue,” she admits, but acknowledges that some lyrics don’t translate well. “The message doesn’t [always] come across with the text,” she explains.

So in those cases, she sings in the original languages, even though she doesn’t speak many of them. “You have to do the research to find out what’s beneath the lyrics,” Brightman says. “The right texture in your voice doesn’t come out unless you really understand the meaning. But once you’ve got yourself around that, it’s perfectly the same as English.”

There’s an inspiring, sunny optimism to many of the songs on Hymn, Sarah Brightman’s 12th and most recent solo studio album. She admits that the record’s character is a mixture of both her own perspective and a desire to counter some of the unease and worry that’s part of modern life. And the response to Hymn and the current tour in support of it has been overwhelmingly favorable, too. “I wanted to work with lots of human beings onstage, so we’ve got a great choir, we’ve got a big orchestra, and we’ve got the band,” she says. “It has a really good feeling about it.

“I don’t think I’ve had a response the same ever as I do with this particular concert and the songs that are in it,” Brightman says. “The very texture and feeling of the concert itself is to uplift people.”