The Whispers: A Half Century of Smooth

Smooth R&B vocal group the Whispers have been a fixture of the music landscape for a half century. With a sound that draws from vocal greats like the Temptations, the Whispers apply a soothing approach that keeps the focus on the vocals. But the enduring act has applied a solid slow-jam dance groove to its approach as well, earning a lengthy string of hits in the process. 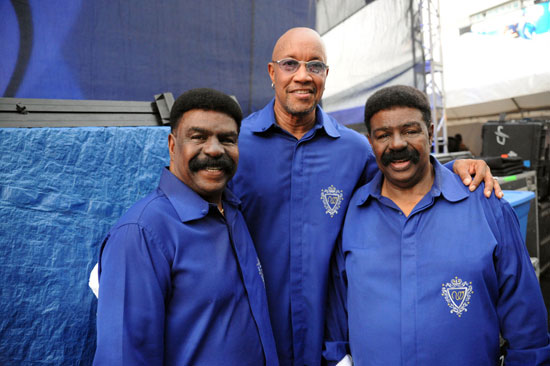 Though they started in the Los Angeles neighborhood of Watts in 1963 and gained fame as a live act—aided in part by support and encouragement from Sly Stone—it wasn’t until the end of that decade that the Whispers scored a record deal. Led by identical twins Wallace and Walter Scott, the Whispers would eventually release more than two dozen albums. Beginning with 1969’s “The Time Will Come” (#19 on Billboard’s R&B chart), the group would score 21 R&B charting singles over the next decade. The Whispers enjoyed crossover appeal as well; nearly half of those singles would appear on the mainstream charts as well, though none cracked the Top 40.

That all changed with the release of “And the Beat Goes On” in 1980. No relation to the Sonny and Cher hit, “And the Beat Goes On” displayed the Whispers’ seemingly effortless ability to change with the times. A sleeker, slicker sound for the new decade resulted in even greater success for the group; the Whsipers hit the R&B Top 40 no less than 16 times in the ‘80s charts. Three of those—including the 1987 smash “Rock Steady”—crossed over onto the mainstream chart as well.

And the hits didn’t stop coming: the Whispers remained mainstays on the R&B chart throughout the 1990s, with nine charting singles. The group was recognized for its accomplishments in 2003 by induction into the Vocal Group Hall of Fame.

Three of the Whispers’ LPs—1980’s Imagination, Love is Where You Find It from 1981 and 1990’s More of the Night—went Gold, The Whispers (1979) and Just Gets Better With Time from 1987 earned the Platinum sales designation. Today much of the group’s 1970s material is out of print; a proper compilation covering that era is long overdue; the few historical collections of the group’s material focus on the ‘80s and beyond, and many best-ofs are latter-day re-recordings of the classic era material.

The Whispers’ front line has remained remarkably constant over the decades. Today the Scott brothers continue to lead the group; vocalist Leaveil Degree has been in the Whispers since replacing original member Gordy Harmon in 1973. The group continues to receive honors; in 2014 the Whispers were inducted into the Official R&B Hall of Fame. In 2009 the group released its first-ever gospel album, Thankful.

The group doesn’t maintain a heavy touring schedule these days; a February date in San Jose, California was billed as the “Valentines Super Love Jam.” An evening of soul and R&B, that show included sets by the Dramatics, Heatwave, the Delfonics, Peaches and Herb, GQ, the Moments, the Lovelites and Eddie Holman.