1958 was a landmark year for saxophonist John Coltrane, and by extension for jazz as a whole as well. Coltrane had made his first recordings (in Hawaii with fellow Navy servicemen) some 12 years earlier, and played as a sideman with Miles Davis and Thelonious Monk in the middle 1950s. and didn’t begin recording under his own name until his 1957 debut, Coltrane, recorded for Bob Weinstock’s independent label, Prestige. While Coltrane is a superb album, it only hints at what was in store for the groundbreaking musician.

In 1958, Coltrane traveled seven times to Van Gelder Studios, working with engineer Rudy Van Gelder. Showing up at the Hackensack, New Jersey studio on average of once a month between January and May, and once more in both July and December (the latter on the day after Christmas), Coltrane recorded 37 songs. Remarkably by today’s standards, each session took place in a single day, and no songs were played on more than one session. 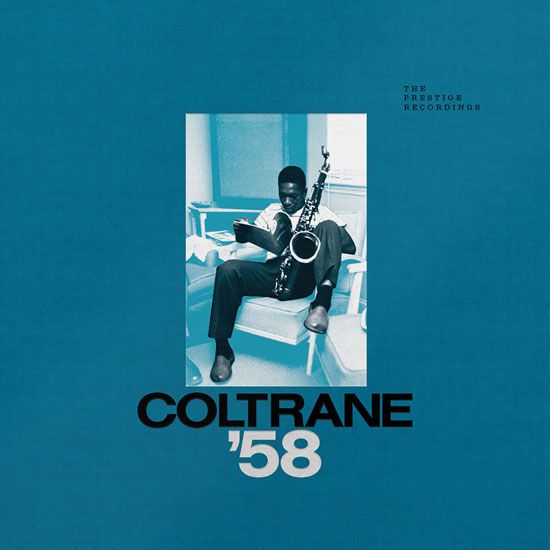 Newly clean after a serious bout with heroin addiction, John Coltrane was man on fire throughout ‘58. And at the risk of gross oversimplification, the experience of listening to those sessions in chronological order reveals the almost real-time flowering of the saxophonist from merely a very good musician to a visionary one.

The 1958 sessions yielded material that would see release on various albums, but only a handful were released during the period in which Coltrane was signed to Prestige. The five tracks recorded on February 7 yielded Soultrane, originally released the year of its recording. The box set’s remaining 32 sides would be scattered across other albums: the March 7 sessions yielded Kenny Burrell & John Coltrane (released 1963). Other tracks appeared on Lush Life and Settin’ the Pace (both 1961), 1962’s Standard Coltrane (1962), Stardust (1963) The Believer and Black Pearls (1964), Bahia from 1965 and The Last Trane (1966).

The tracks cut in gloriously pristine high fidelity by Van Gelder variously featured some of the era’s best sidemen, many of whom went on to greater fame themselves: Kenny Burrell on guitar, trumpeters Donald Byrd and Freddie Hubbard, Paul Chambers on upright bass, drummers Jimmy Cobb, Louis Hayes and Art Taylor, Tommy Flanagan and Red Garland on piano and trumpeter/flugelhorn player Wilbur Harden.

Coltrane’s earliest session from this banner year began with the saxophonist playing in a relatively conventional (yet transcendent) style; as the year progressed, Coltrane seemed to grow more ambitious. His famous “sheets of sound” (characterized as such by critic Ira Gitler) showed up early, but became a central part of his approach as the year wore on.

The 8LP set opens with “Lush Life,” a cut that would be released as the a-side of a 1960 single. Six other tracks appeared as a- or b-sides on other Prestige singles (“I Want to Talk About You” and “By the Numbers” with Red Garland each saw release on 45s’ split across both sides). By the time of cutting the Sammy Cahn/Jule Styne chestnut “Time After Time” in December 1958, Coltrane had assimilated his adventurousness into a wholly accessible style. His approach seems almost effortless, true to the original melody yet unencumbered, unrestrained by it. 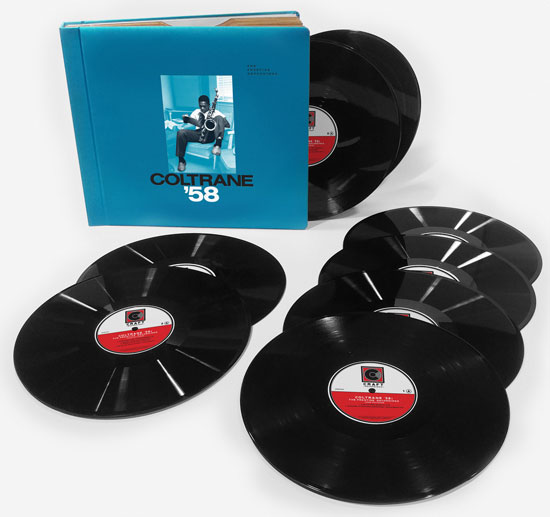 Hardcore Coltrane enthusiasts – and no doubt many others – will already own all of these tracks via their appearance on the aforementioned LPs and/or CD reissues. But that fact in no way lessens the impact or essential nature of the new Coltrane ‘58. Housed in a heavy cloth-bound binder, the set is spread across eight 180-gram vinyl LPs, each placed inside a black paper sleeve that fits into a heavier brown paper page of the 1 1/2” thick binder. The package also features a bound-in 40-page booklet that includes Grammy-winning music journalist/author Ashley Kahn’s superb essay, copious black-and-white and color photographs and reproductions of relevant memorabilia (Van Gelder’s handwritten notes, tape boxes and so forth).

The loving care that has gone into every part of this package more than justifies its cost. In fact, the music itself does that; as top-notch as it is, everything else included in Coltrane ‘58 should be regarded as bonus material.