Album Review: The Fall – I Am Kurious Oranj 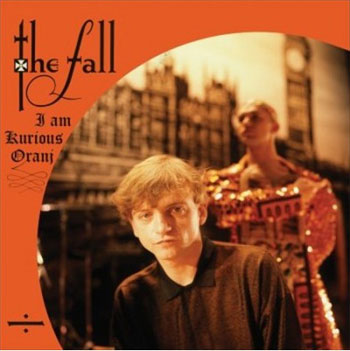 The Fall were never most people’s idea of a commercial group. They didn’t have the jangling melodicism of the Smiths, nor the sophisticated funk groove of Gang of Four. But the British postpunk band did have Brix Smith. She was Mark E. Smith’s wife and lead guitarist, and her influence moved the band in its most accessible musical direction.

On its face, this 1988 album might seem to be a foreboding, ungainly project; it’s the soundtrack (of sorts) for a ballet about William of Orange’s rise to the the English throne some 300 years earlier. But the tunes are superb. The irresistible jangle of “Overture from ‘I Am Curious, Orange’” is a showstopper. Even the track’s growling vocals work, adding bit to the shimmer.

This is not to suggest that I Am Kurious Oranj isn’t idiosyncratic and deeply strange. “Dog is Life” sounds like a field recording of Mark E. Smith ranting about … something. And “Jerusalem” has a style and manner not a thousand miles removed from Public Image Limited. “Kurious Oranj” sounds like ska turned on its side and run through a wringer (with saxophone and other clattering instrumentation and vocals seemingly tossed in at random).

“Wrong Place, Right Time” is a kind of minimalist, postpunk rethink of ‘70s cock rock, with muscular corkscrew bass lines. “I can’t dance, I can’t sing,” Smith tells us. Perhaps he’s right, but he and his band can certainly entertain.

“Guide Me Soft” is sinister and droning. “Win Fall C.D. 2080” draws from dub, but it certainly isn’t dub reggae; an insistent vibraphone line sounds more than a little bit like part of King Crimson’s “Neal and Jack and Me,” a track off the progressive pioneers’ 1982 album Beat. Perhaps Smith heard it.

“Yes, O Yes” pits deliberate single-note piano against guitar, bass and drums and Smith’s voice, all seemingly doing their own things. Yet they feel (tentatively) connected. With another singer, “Van Plague?” could have potentially been a hit. With Smith, it’s just weird. And wonderful, if you dig the Fall’s overall aesthetic. “Bad News Girl” is a catchy riff and a weird – even by Fall standards – lead vocal.

Composition credits (Mr. and/or Ms. Smith) notwithstanding, the real hero of I Am Kurious Oranj is bassist Stephen Hanley. His thunderous, buzzing electric bass is the glue that holds these 11 songs – and the album as a whole – together musically. Though different formats featured different a sequence, the LP ends with the poppy (hey, we’re sort of grading on a curve here) “Cab it Up!” No clue what it’s about, but the live track is the sound of a band having fun. Smith even yelps a bit.

Listeners won’t come away from listening to I Am Kurious Oranj with any greater understanding or appreciation of the reign of King William. But they’ll still be richer for the experience. The Beggars Arkive vinyl reissue of the album features a lavish gatefold package, and the vinyl itself is – wait for it – orange.