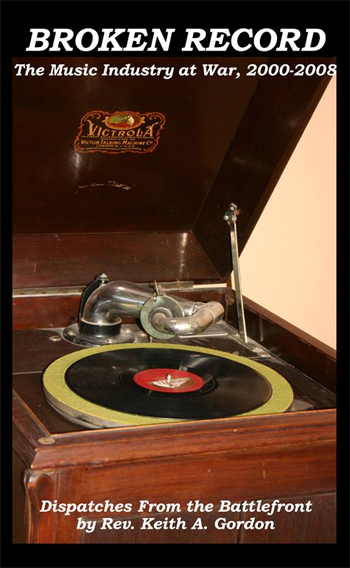 One of my favorite lines of dialogue comes from William Shakespeare’s As You Like It: “Sell when you can; you are not for all markets.” Though the line is delivered with sarcasm, it’s as apropos today as it was 400-plus years ago. It provides a useful guide to creative types, too: not everything you do will be of interest to everyone.

Take the Rev. Keith A Gordon’s recent Blues Deluxe: The Joe Bonamassa Buying Guide. Though in their original forms – in magazines and zines, on websites and blogs – Gordon’s reviews of the blues-rock guitarist’s various releases had undeniable value, as a book-form compendium, I’m not sure whom the intended audience is. If you’re enough of a fan to read a whole book of reviews on him, you probably own all the music already.

I have no such quibbles with the latest from the astoundingly prolific Reverend (and I thought I wrote a lot). Broken Record: The Music Industry at War, 2000-2008 is, again, a collection of previously-published essays. And while because of the age of some of these pieces – nearly two decades old now – some of the Rev’s observations are past their sell-by date, taken as a whole, Broken Record provides a deep-dive, incisive look at the turmoil that befell the industry in the wake of Napster and other developments.

Far more often than not, these essays demonstrate that Gordon had a keen sense of what was happening, why it was happening and – had anyone bothered to ask him back then – many suggestions as to how the industry could have turned things back in its favor. Occasionally he misses the mark, but most times Gordon is dead-on with his analysis and prescriptions. That fact is borne out when one realizes that the music business eventually (and when faced with dwindling options) put into place some of the very ideas he suggested decades ago.

If you’re someone who looks at the current state of the music business and wonders how it got that way, Broken Record offers up a kind of time capsule look at the issues that roiled the industry. Recommended.