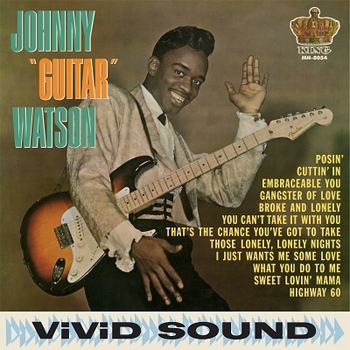 When one thinks of the bluesy masters of the electric guitar, the name Johnny “Guitar” Watson is sure to be mentioned.

Watson’s second guitar LP mines a variety of styles; “Posin’” feels a bit like Philly soul, with massed backing vocals and Watson’s blues-shouted lead vocal. But when the master of the Stratocaster launches into to his sinewy guitar solo, it sounds like nobody but him. Even the strings on the track don’t overwhelm the stomping vibe.

This 1963 LP – originally released on King records – features a dozen songs , and they’re pretty much all great. “Cuttin’ In” sounds halfway between a ‘50s slow dance number (again with strings) and very early Peter Green-era Fleetwood Mac. Rare was the artist who could stand up to a string section; Watson’s fretwork cuts right through the syrup, and in fact the strings actually make the tracks better than they’d otherwise be.

It takes some chutzpah to add the name of your chosen instrument to your stage name. But Watson more than earned the right, and a dozen pieces of evidence to back up that assertion are on this LP. “You Can’t Take it With You” churns out a slow, loping blues figure – with a noisily dissonant piano chugging along – and some tasty Watson licks. “I Just Wants Me Some Love” features some soulful horns backing the core group. For an album of its era, Johnny “Guitar” Watson is surprisingly varied.

In later years Watson – the original Gangster of Love, thankyouverymuch – would pursue a funk direction, but this debut collection presents him in his fully-formed blues/r&b guise. In crisp monaural sound and pressed on translucent amber heavyweight vinyl, Johnny “Guitar” Watson is a rare treat indeed.