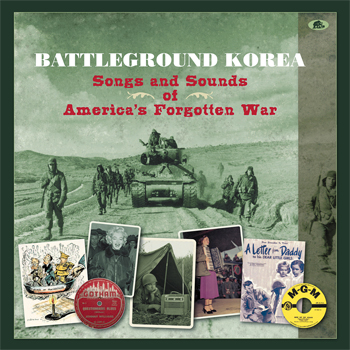 Readers old enough to remember the long-running and beloved television sitcom M*A*S*H likely know that according to its creators, even though the show was set in wartime Korea, it was really about American involvement in Vietnam. But despite the show’s comedic framework, it managed to explore some important truths about that ill-advised endeavor in southeast Asia.

The actual Korean War (um, “police action”) has itself received relatively little discussion. Coming as it did so soon after WWII, the Korean conflict seems to have in many ways slipped from the collective American consciousness. So in a sense it’s not surprising that it has been left to a German company – Bear Family – to compile what looks to be the definitive document of the musical response to the Korean conflict.

Battleground Korea: Songs and sounds of America’s Forgotten War is an astoundingly well-put-together package; it features a sturdy coffee-table type book in a sturdier-still slipcase, and it includes four CDs. The music within is grouped into four thematic categories, each with its own disc: “Going to War Again,” “Somewhere in Korea,” “On the Homefront” and “Peace and its Legacies.” 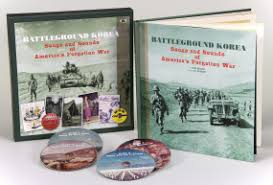 The remarkable qualities of this set are myriad. Chief among them is the wide and presumably exhaustive net that compiler/authors Hugo Keesing and Bill Gerrhart have cast. Strictly from a music perspective – forgetting for a brief moment the subject matter – Battleground Korea explores most every style of American music of that era: folk, blues, country, rhythm and blues, spoken-word and even kitschy patriotic ditties. Some of the artists will be familiar to music fans and historians: Lightnin’ Hopkins, Sunnyland Slim, Fats Domino, B.B. King, John Lee Hooker, Lloyd Price, Big Boy Crudup and Vic Damone. And that’s just a sampling of artists represented on the first of four discs.

The hardcover book features several in-depth essays that help place the Korean War in context, as well as set the scene for music’s relationship with the war. Detailed biographical and background essays are provided for every recording, and – since the subject matter is at the heart of the collection – printed lyrics are provided for all of the songs.

The book also features a staggering collection of photos – quite a few in color – that provide added dimension to the narrative. As historical releases go, Battleground Korea establishes a nearly impossibly high standard. For those interested in digging into the Korean War from a rarely-approached historical angle, this boxed set is just the ticket. Recalling George Santayana’s aphorism about not learning the lessons of the past, and with the Korean peninsula (and the American government’s perspective on it) currently back in the news, there’s no better time.