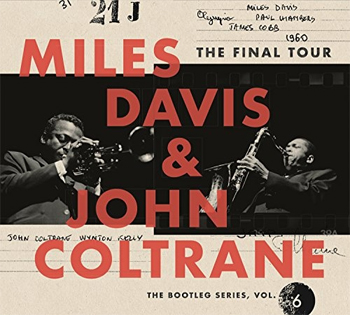 Miles Davis’ 1960 tour with John Coltrane ranks among the most historically significant series of concerts by either of those artists. And that’s saying something, in light of each musician’s landmark importance. The Davis estate has, in recent years, been releasing sets of recordings under the banner of “The Bootleg Series,” because many of these tapes have circulated among collectors for some time. Many, in fact, have received grey-market release in Europe, giving them the air of legitimacy.

The Bootleg Series, Vol. 6: The Final Tour is a 4CD set drawing from concerts in Paris, Copenhagen and Stockholm in March 1960. As it happens, I reviewed a grey-market release surveying the same material just over three years ago: All of You: The Last Tour 1960 features most of the material on this official Columbia Legacy set, plus parts of two concerts recorded in April 1960.

Soem songs are repeated on the set (“On Green Dolphin Street” appears no less than three times) but the nature of jazz – especially from these titans – means that there is no such thing as too many different recordings. The lineup for the shows – trumpeter Davis, Coltrane on tenor sax, pianist Wynton Kelly, bassist Paul Chambers and Jimmy Cobb on drums – is the stuff of legends, and these recordings capture the quintet in all its improvisational glory.

It doesn’t seem that Legacy has done anything with the tapes that hadn’t been done before, but since sound quality was quite good on the grey-market release, there didn’t seem much point in fiddling. The Copenhagen set – from radio transcription tapes – is here in absolutely superb fidelity. Ethics of bootlegging aside, the new collection’s liner notes by Ashley Kahn and the set’s official status make The Final Tour the only choice, and an essential one for jazz fans at that.