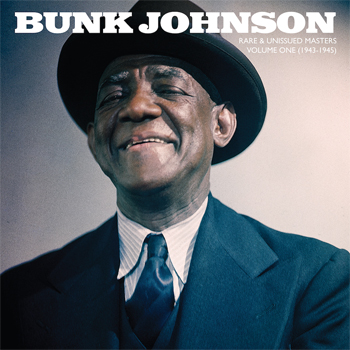 Bunk Johnson was a New Orleans jazz trumpeter who exemplified the pre-war jazz style closer to Louis Armstrong than, say, Miles Davis. Though the style was well past the apex of its popularity, it remained (and remains) of significant historical interest. And so in 1943, ’44 and ’45, folklorist Bill Russell embarked on a mission to document examples that early jazz.

One subject of his search was Johnson. Using non-union musicians, Russell captured Johnson and his sidemen in a variety of contexts: a music hall, a living room, a back yard. The results are of surprisingly high sonic quality. Three 10″ LPs were released on Russell’s American Music. Johnson had of course recorded before, and would continue to record though the end of 1947 (he died in 1949).

The songs on this set draw from the more well-known jazz songbook, and include a number of standards and traditional songs. Spirited readings of Scott Joplin’s”Maple Leaf Rag” and the hymn “Just a Closer Walk with Thee” are highlights of the set. But occasional pop songs find their way into the proceedings, such as Cole Porter’s “Don’t Fence Me In.”