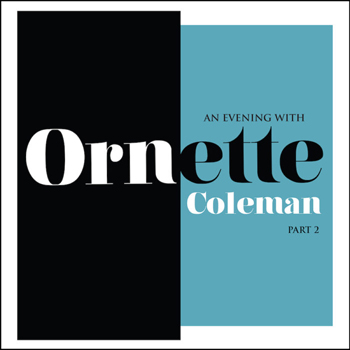 No one would ever accuse Ornette Coleman of making “easy listening” music. One of the acclaimed and innovative jazz musician’s few forays into what could loosely –very loosely – termed pop music was his session work on Yoko Ono / Plastic Ono Band in 1970. And when your grounding in pop is Yoko, it’s safe to say that you’re pretty out-there.

An Evening with Ornette Coleman was originally issued in 1967; the double-LP was a document of an august 29, 1965 concert at Croydon, England’s Fairfield Hall, a popular venue for recording live albums. The first side of the first record didn’t even feature Coleman; instead, it was a performance of “Sounds and Forms for Wind Quintet, Movements 1-10.” Coleman came onstage only after that piece was completed, joined by upright bassist Dave Izenson and percussionist Charles Moffett.

That 2LP set wouldn’t receive a U.S. release until 1975, when Arista Records put it out under the title The Great London Concert. In 2016, Org Music released the first disc as a standalone album (fittingly enough titled An Evening with Ornette Coleman, Part 1). This 2018 Record Store Day release – limited to 2000 copies worldwide – presents the second part of the performance.

It’s no understatement to observe that this is some challenging music. Coleman does more than play saxophone: for the first half of “Falling Stars” he saws away on violin, and while the results are cinematic in their intensity – with Moffett banging away on all manner of percussive instruments – it’s surely not toe-tapping jazz. “Wildly abstract” might be a more accurate way of describing it.

“Silence” is anything but. Coleman conjures otherworldly sounds form his guitar, and engages in a kind of call-and-response with Moffett, punctuating that musical conversation with spans of silence. Those spaces are as important to the work’s overall effect as the noisy parts. And Coleman’s oft-underappreciated ability to craft ear-candy melodic lines does crop up here and there, though rarely for more than a few seconds at a time. For most of the proceedings, there’s plenty of skronk.

Ornette Coleman’s penchant for ironic titles continues unabated with “Ballad,” a challenging work that makes effective use of shifts in volume. “Doughnuts” is characteristically playful, but still makes virtually no concessions to musical convention.

The transparent vinyl pressing of An Evening with Ornette Coleman, Part 2 probably shouldn’t be the first stop for novitiates interested in approaching Coleman’s body of work; for that, 1958’s Something Else!!!! can serve as a more (relatively) conventional-sounding entry point. But for those already immersed in the man’s work, an hour spent spinning An Evening is time well spent.