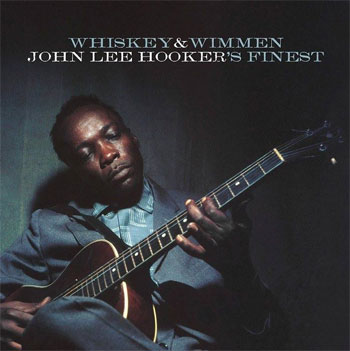 John Lee Hooker was one of the most important blues artists of his – or any other – generation. With a style that managed at once to be thoroughly authentic and somehow commercial, Hooker’s output has become part of the American musical lexicon.

After a stint on a smaller label, Hooker signed with Vee-Jay, for whom he recorded a substantial number of singles, including the 1962 hit “Boom Boom.” But – as best as I can tell, and I could be wrong on this – Hooker didn’t seem to have had his Vee-Jay era work compiled on an album, at leat not during the time he was signed to the label.

Whiskey & Wimmen: John Lee Hooker’s Finest corrects that. And even if I’m wrong – even if there’s a Vee-Jay album release in the period 1955-1965 that spans this material – the vinyl LP Whisky & Wimmen is an essential compilation. In addition to excellent sound – clearly drawn from master tapes, which is never a given when we’re talking about the work of classic blues artists – the set boasts detailed annotation (who played on what, release date, chart position if any). And if that weren’t enough, a nice essay from blues historian Bill Dahl, plus some vintage photographs, rounds out a winning set packaged in a study gatefold sleeve.

The instrumental accompaniment on some of the tracks – “I Love You Honey” from 1958, for example – is delightfully loose-limbed. But that quality only adds to its appeal. Whether he’s backed by a band, or (as on several cuts) only by brother Earl on bass, John Lee Hooker delivers tour-de-force performances on vocal and guitar. The music on Whiskey & Wimmen is both historically monumental and a hell of a lot of fun. If you appreciate Hooker even a little bit, and if you own a turntable, this record should be a no-brainer purchase.