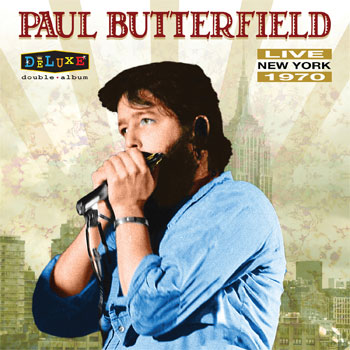 A blues vocalist and harmonica player extraordinaire, Paul Butterfield is most fondly remembered for his time leading the Butterfield Blues Band, an exemplar of the successful hybridization of electric jazz and blues; not insignificantly, the result of that hybrid sounded and felt a lot like rock (of the more adventurous variety).

For reasons one suspects having to do with licensing, RockBeat credits this 2LP set to Paul Butterfield; blues fans will be delighted to know that it’s in fact the 1970 lineup of the Paul Butterfield Blues Band, with one David Sanborn on alto saxophone. While the lineup doesn’t scale the lofty heights of the mid-sixties East-West, as a more purely blues outing, Live in New York 1970 is simply superb.

Recorded in front of a small audience at Phil Ramone’s A&R Studios and originally broadcast on WPLJ, the set finds the band taking on extended workouts of blues gems like Albert King’s “Born Under a Bad Sign.”

The recording comes courtesy of – of all things – the Singer Sewing Machine Company. A series of radio broadcasts had featured Procol Harum and the Allman Brothers Band, but when funding ran out, Singer stepped in to provide the cash needed to continue. Oddly enough, each Singer retail store had a record department, and when an artist was featured on the radio program, the store did a cross-promotion and discounted that act’s latest record.

Just to avoid confusion, the group’s then-current album, The Paul Butterfield Blues Band Live, produced by a young whippersnapper called Todd Rundgren – is not the same as this set. But because the performance dates from around the same time, the set list is similar. But this 2LP set features more than nine minutes of “Play On,” complete with Rodney Hicks’ tasty electric bass solo. The horn section is absolutely on fire throughout, and Butterfield is in fine voice.

Also unique to this performance is “Love March.” While the first minute or so features Butterfield introducing the band, once everybody tightens up, the song features a dual lead vocal from Butterfield and sax/flute player Gene Dinwiddie. The latter’s laid-back and soulful turn is a thing of beauty, especially in the way it contrasts with the mostly uptempo vibe of the other songs in the set.

There have been some dodgy live releases of late from RockBeat – a Commander Cody title (Live from Ebbetts Fields, Denver Colorado Aug. 11 1973) and a Flamin’ Groovies set (Live 1971 San Francisco) that can best be classified as legit bootlegs; the audio quality on both is poor at best. Not so with the high-fidelity source for this Butterfield set. Highly recommended to fans of powerful, soulful Chicago blues.