While retirees and young professionals might not always share the same taste in music, one leisure activity with appeal that spans generations is the music festival experience. And in recent years, many ocean cruises have come up with a successful way to capture that excitement. Rock ‘n’ roll-themed cruises are among the most popular “floating festivals.” Varying widely in scope and character, all combine the thrill of live music and the excitement of a cruise, while erasing the barriers between concertgoer and performer. 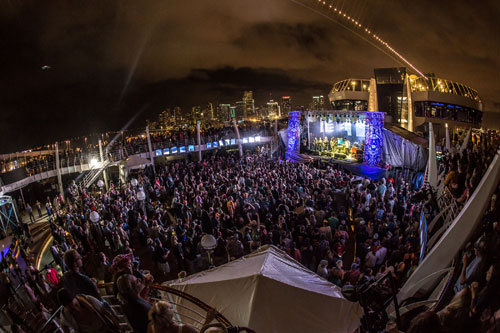 Where the Action Is! Rock & Roll Cruise
The nostalgia-themed Where the Action Is Cruise features pop stars from the 1960s. That annual event grew out of conversations between 60s bandleader Paul Revere and his Boise, Idaho-based travel agent. “This coming January will be our 24th year,” says Tammy Selee of Concerts at Sea. Unlike many other music-themed cruises, the WTAI cruise is limited to 800 passengers, and reserves only a portion of the ship.

Keeping its human scale has allowed the Where the Action Is cruise to flourish. The event books the Caribbean Princess’ on-board theater and specific lounges for its activities, creating a cruise-within-a-cruise experience. The demographic for the WTAI cruise falls mostly into the 65-70 year old range, and many are fiercely loyal. “There’s no group of people more nostalgic than baby boomers. We’ve got people returning for their 18th cruise with us,” says Selee. “Before I get off the ship at the end of the cruise, I’ve got more than 200 people booked for the next one. It’s become a family reunion without the family!”

Revere passed away in 2014, but his band – led by son Jamie – continues to headline the cruise, along with 1960s hitmakers Mitch Ryder, The Cowsills and several others. Singer-guitarist Bob Cowsill – gearing up for his family band’s third cruise – describes the appeal of the WTAI cruise this way: “The meeting-and-greeting is constant; [we performers] get to know our fans. The connection is really special; it stays with us after the cruise ends.”

Jam Cruise 15
Cloud 9 Adventures has been hosting music-themed cruises since 2004, says Kelly Viau, the company’s Director of Business Development. Jam Cruise focuses on musicianship and the interplay between top-notch players. A full-ship event aboard the Norwegian Pearl, Jam Cruise attracts between 3000 and 4000 people for its annual sailing.

The population attending Jam Cruise “skews 35 to 50,” Viau says, “fairly evenly-split between male and female, with a lot of couples.” Cruisers come from all over North America. While Viau wouldn’t describe Jam Cruise as recession-proof, she notes that “people value their vacation time, and are often more apt to make sacrifices in other areas so as not to give up that one getaway of the year.”

Jam Cruise features a diverse mix of classic acts (The Original Meters) and hot artists newer to the scene (Kamasi Washington, Dopapod). Viau raves about the Jam Cruise’s unpredictable nature. “You never know when one of the artists is going to break out into melody in the middle of the dining room,” she says, “or when the elevator door opens, and there’s a musician playing acoustic guitar.” She notes that many unexpected musical collaborations take place, and that a number of wedding proposals have happened on the stages of the Jam Cruise.

“Punk jazz” vibraphonist Mike Dillon looks forward to the musical camaraderie and “cross-pollination” that’s central to the Jam Cruise. “It really is a jam cruise, he says. “The artist-at-large theme works really well; I get to sit in with different folks, try this, and try that.” Dillon has made many new friendships and musical alliances on past cruises.

A Wide Range of Choices
There are myriad music-themed cruises scheduled annually, from short excursions to lengthy trips, and in a variety of ports of call. Multi-platinum recording artist Peter Frampton is looking forward to his spot on the ’70s Rock & Romance Cruise in March 2017 aboard the Celebrity Summit. “It’s a lot of fun,” he says. “It’s a great opportunity for us to go and play with a lot of bands, and see a lot of friends.”

Progressive rock hero Neal Morse is featured on the “prog”-themed Cruise to the Edge 2017, led by the band Yes aboard Royal Caribbean’s Brilliance of the Seas. “It’s a great environment for a music festival,” Morse laughs. “Normally you’d be subject to the elements and mud and bad food and heat and God knows what.”

Morse makes an important point. Music-themed cruises combine the very best of the on-board experience with the unique thrill of a huge music festival. But a floating festival like Jam Cruise, Where the Action Is! or any of the many other choices improves upon both by providing unprecedented levels of interaction between the performers and the cruisers.

An edited version of this feature appeared previously in Porthole Cruise Magazine.