One of the exercises in which I regularly engage is a little thing I like to call “Smash or Trash.” The name is stolen from a segment the radio deejays on Atlanta’s 96 Rock (WKLS-FM) used to do back in the late 70s and early 80s (I’m sure other stations did it as well). The idea is simple: listen to a bit of a new album, decide if it goes in the “good” or “bad” pile, and move onto the next.

As a music reviewer, I get loads of CDs. Yes, compact discs: I’m old-school enough that my interest in reviewing music based on MP3 files is quite limited, though on occasion I do just that (one’s coming up soon, as it happens). But I get so many of the things – on request, semi-solicited, unsolicited – that it’s simply not practical to give all of them a review. 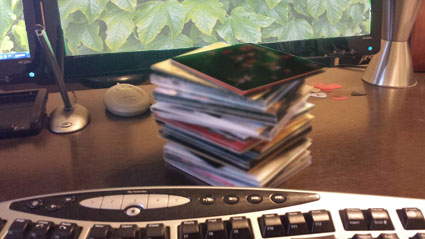 My general policy – for many years now – has been not to review music by artists whom my readers are unlikely to know unless I can recommend it. In other words, if you’ve never heard of an artist and his/her new album doesn’t impress me, you won’t hear about it from me. Fledgling recording artists need all the help they can get, and it benefits no one for me to knock ’em down. With respect to reviews, I see my role as a kind of consumer guide. I read a Facebook comment recently that asserted that good reviews never sold an album. I firmly disagree.

But the process of giving album a listen remains. So whenever the pile of new CDs gets unwieldy, I set aside a bit of time – less than those artists might hope, but more than some of the music deserves – and play Smash or Trash. I start at the beginning of the first track, and sometimes a quick listen to part of that is enough for me to say, “Yeah, this interests me.” In that case, I click forward to subsequent tracks to ascertain that what resonated in the opening track wasn’t an anomaly. If it’s all good, that CD goes in the yes/review-later pile. And I’ll eventually give it a full listen.

Other times, I get a sense right away that a given album isn’t my thing at all. In those cases – generally fifteen seconds in is plenty of time – I again skip ahead to make sure my initial impression isn’t off base. If I’m right, then that one goes in the no-thanks pile.

At this moment – I’m doing this little exercise and writing about it in real-time – I have two dozen discs. So here we go! The names are being withheld to protect the unassuming, if not innocent.