All last week (and all this week) I’m celebrating the six-year anniversary of launching the Musoscribe blog. Every business day since July 2009, I’ve posted new content – interviews, essays, reviews and features – and now the blog hosts well over 1600 pieces of my work.

But of course I was writing before that. Today I’m taking a look deep into the archives; there I find a number of notable interviews dating from 2009 and earlier. 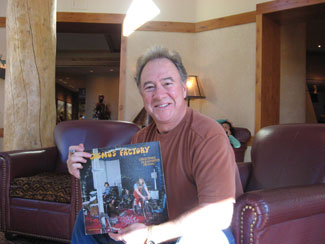 Ian Anderson of Jethro Tull
Ian Anderson is one of the most articulate interview subjects I’ve ever encountered. When we first spoke, the United States was in the midst of the Democratic presidential primaries, and there was much speculation as to which candidate – Hillary Clinton or Barack Obama – would earn the Democratic nomination. Now, of course that has nothing at all to do with music. But halfway through our lengthy talk, Anderson switched topics form music to global affair and American politics. His insights were fascinating in this interview from April 2008. I interviewed him again in 2013, and that interview (while shorter) was a lot of fun, too.

The Flaming Lips
One of the few regrets in my adlt life is that I missed the opportunity to interview The Flaming Lips in person in May 2006. But owing to some unexpected and (to say the least) jarring life events, I had to cancel at the last minute. Happily I was able to reschedule a phone interview with Steven Drozd shortly thereafter, and I’ve since gotten to see them live onstage a number of times.

Crowded House’s Neil Finn
Thanks to a fake ID, I got into Atlanta’s Agora Ballroom twice in the early 80s to see Split Enz. In the years that followed, I was fortunate enough to see Neil Finn’s next group – Crowded House – in concert a few times as well. And then in 2007 I interviewed Neil Finn. Lucky me! In those days the pieces I was hired to write tended to be quite brief; I should go back to my early interview recordings and write longer features based upon them.

Stu Cook of Creedence Clearwater Revival
The bad blood between John Fogerty and his former CCR rhythm section of Stu Cook (pictured above) and Doug “Cosmo” Clifford is well documented. But in person, Cook is quite the affable guy, with not a hint of bitterness. He and his childhood friend Clifford still put on a solid show with their band Creedence Clearwater Revisited. In the second of two interviews I conducted with Stu Cook, he talks about, well, everything you’d want and expect him to talk about.

Gentle Giant
When people want to speak ill of the musical excesses of progressive rock, Gentle Giant is often cited. Me, I love ’em, and was thrilled at the opportunity to interview a few members of the band in connection with some reissues of their classic albums.

Dungen
I’ve always been more of a music guy than a lyrics guy; the tone and texture of the voice is often as important to me as what’s being sung about. That’s part of the reason I’ve always treasured the music of Dungen, who sang only in Swedish. The group seems to have gone inactive now, but on one of the occasions upon which I saw the band live, I managed to interview Dungen’s leader, Gustav Estjes.

Yoko Ono
Enough time has passed that when someone pulls out the tired “Yoko broke up the Beatles” argument, nobody takes them seriously. When I interviewed Yoko Ono in 2007, I found her charming, engaging and candid. She was surprised and pleased that I knew of her 1960s-70s film work, too.