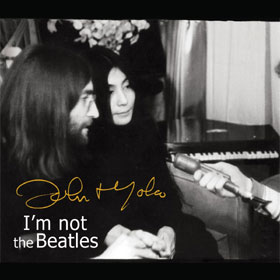 Way back in 1990, author John Robertson published a provocative book called The Art & Music of John Lennon. The title might lead one to think it’s a coffee table book or somesuch; in fact it’s something much more weighty (metaphorically speaking, that is). Robertson’s central thesis – consistent with a largely unspoken viewpoint espoused by John Lennon and wife/partner/collaborator Yoko Ono – is that everything John and Yoko did was essentially part of one big work of art. Yes: not only music, but written pieces (such as Yoko’s Grapefruit), public appearances (like the 1969 Amsterdam and Toronto bed-ins), films (Apotheosis, Erection, and so on) and interviews.

If one buys that argument (and I do), it points out John and Yoko’s commonality with Frank Zappa: Zappa’s entire body of work somehow fits together, puzzle-like, into something aficionados call the Project-Object.

Robertson doesn’t make explicit mention of the series of interviews the couple held with Village Voice journalist Howard Smith, but passing mention is made to those interviews in the larger context of the bed-ins and other milestones in their timeline. As it happens, John and Yoko sat (occasionally over the phone, more often in person) with Smith for no less than a half dozen interviews between May 1969 an January 1972. Totaling more than four hours of audio, these previously unreleased conversations have now been released as an eight-CD set called I’m Not the Beatles.

Of course the Lennons gave many interviews in that period; before John’s self-imposed retirement (1975-79), he was one of the most accessible artists in the pop world. And as the couple lent their high profiles to a dazzlingly varied assortment of causes, there was nearly always a timely and relevant reason to sit down with them for a chat.

A few things are especially remarkable about these interviews. One, John and Yoko are nearly always patient and respectful of their interviewer. One must realize that they had answered these very same questions – or slight variations on them — dozens of other times; especially in the case of the bed-ins: how many ways are there to respectfully respond to a question that basically asks, “What the hell is it you’re doing?” the flip-side remarkable quality of the interviews is that Smith seems unafraid to ask tough questions. He pushes Lennon hard (and repeatedly) on the efficacy of sitting in bed, planting acorns, posting billboards and the like, all “for peace.” And when he doesn’t get an answer that satisfies him, he asks again, from a slightly different angle.

All of the big events that John and Yoko were involved with in the period get discussed in these interviews. The Toronto Peace Festival and the couple’s involvement with Greenwich Village leftists are explored in some detail.

The booklet enclosed with the CDs sketches the arc of Smith’s getting to know the couple, and places the series of interviews into historical context. Liner notes writer (and Beatles expert) Chip Madinger credits Smith with introducing John and Yoko to the nearly talentless John Peel, but listeners shouldn’t hold that sin against Smith; just appreciate his skills as an interviewer and delight in this fascinating box set of conversations wit John and Yoko.