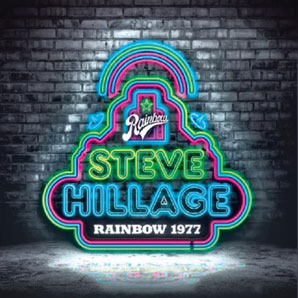 This week of archival, previously-unreleased live sets wraps up with one that’s both accessible and of excellent sonic quality. In 1977, guitarist Steve Hillage (erstwhile of Gong) was near the apex of his commercial ascendancy, on the heels of the Todd Rundgren-produced L album. This date, captured at London’s Rainbow, finds Hillage and band wheeling out several songs from that album onstage. The perennial Hillage concert favorites that bookended L – Donovan‘s “Hurdy Gurdy Man” and George Harrison‘s Yellow Submarine-era Beatles track, “It’s All Too Much” – get some of their earliest live performances here.

While Hillage’s voice isn’t the strongest instrument, he holds his own vocally amidst the swirl of his guitar, backed ably by his longtime partner Miquette Giraudy (synths), drummer Joe Blocker and bassist Curtis Robertson. The band previews more than half of the songs that would appear on L‘s followup, 1977’s Motivation Radio; that LP ranks with L as among the best of Hillage’s long and varied career. With its oh-me-oh-my vocals, “Light in the Sky” makes the best of Giraudy’s voice, while – as every song here does – highlighting Hillage’s fluid and spectacular guitar work. “Radio” is among the set’s most subtle pieces, and among its most musically effective as well. A pleasing mix of short, snappy tunes and longer (but not meandering) pieces renders Rainbow 1977 the second next best thing to having been there. (A concert DVD would be the next-best thing, of course.)

There’s a fair amount of overlap between the tracks on this live set and with those on Hillage’s live compilation 2LP set Live Herald from 1977; the primary appeal of this set is that it (purportedly) represents a single show rather than picking-and-choosing from a tour’s worth of recordings.

Space rock with mystical hippie trappings and ecological subject matter was and remains the metier of the multifarious Hillage, and it’s all shown to good effect – and excellent fidelity – on Rainbow 1977.