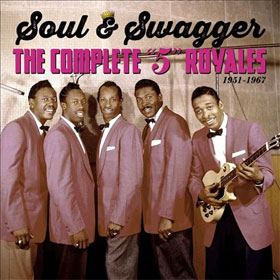 There are a select few acts in musical history that didn’t sell a ton of records, yet exerted influence far beyond what their chart action might suggest. Among the most celebrated examples are The Velvet Underground and Big Star. Both groups have had said about them – apocryphally or otherwise – that they sold few records, but that everyone who bought one went out and formed a band.

That short list should also include The “5” Royales (the quote marks are part of the name). Though their notoriety is largely confirmed to blues and r&b enthusiasts, the group can count among their fans no less than Steve Cropper of Booker T & the MG’s fame, Stevie Wonder, Eric Clapton, and Jimmie Vaughan. The “5” Royales’ specialty was a bluesy, often gospel-infused vocal style not miles removed from The Platters, Drifters and Coasters. But in addition to some excellent, soulful close harmony work, the band had within its ranks a secret weapon: guitarist Lowman Pauling. His direct, compact and effective leads were an integral part of the group’s sound.

A new 5CD set (naturally, there are five!) collects all of The Winston-Salem NC-based group’s material, from their earliest 78s in their 1951 gospel phase (when they were known as The Royal Sons Quintet) through their later material. The group’s unique sound was a synthesis of blues, early rock’n’roll, doo-wop, rhythm and blues and what would later be known as soul.

The new set (on Rock Beat Records) titled Soul & Swagger: The Complete “5” Royales 1951-1967 is lavishly packaged in a sturdy hardcover book roughly the size of a stack of 45rpm singles; that’s fitting, as The “5” Royales existed in an era when the single was king, when album-length releases weren’t yet the standard. A detailed and deeply researched history and discography includes details including personnel on each track, release date and matrix number.

The set is strewn with gems; The “5” Royales were so versatile and accomplished that each listener will likely have his or her own favorite tracks. The blues-based “Thirty Second Lover” (from 1957) is as good as anything that came out that year; it sounds a bit like The Dixie Hummingbirds backed by Scotty Moore, DJ Fontana and Bill Black. Pauling tears up the fretboard on “Say It,” and their version of “Dedicated to the One I Love” is miles away from the Mamas & the Papas version.

Some of the material features saxophone (in those days, as often as not, sax – not guitar – was the lead instrument of choice for r&b sides), and swings in a manner a few steps advanced from – but not wholly unlike – Louis Jordan and His Tympani Five. A bit of gritty guitar distortion crops in from time to time, but it’s nicely balanced by the soul-stirring close harmony work of the group.

As noted above, The “5” Royales were a singles outfit. They did cut a few albums of material, but not until the CD era did any sort of thoughtful compilation of their best work appear. But now in 2014, no less than two compilations have been released. A 2CD set called The Definitive “5” Royales: Home of the Blues & Beyond is a good and thoughtful survey. But the Rock Beat set includes all of the material the group released 1951-1967, liberally sprinkled with rare, unreleased and alternate takes. And if you’re gonna dive into the work of The “5” Royales, you ought to do it right. Thanks to its comprehensive nature and the care with which is was assembled (a few early sides excepted, the sound quality is stellar), Soul & Swagger: The Complete “5” Royales is the one to buy.