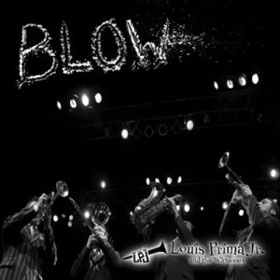 I first discovered the music of Louis Prima (Sr.) in college in the mid 1980s. An elective course I took, a class called American Popular Music: Stephen Foster to Present, exposed me to all manner of music then-heretofore unknown to me. Besides Gershwin, the music that most resonated with me was what is known as jump blues and swing, the exuberant style exemplified by Prima (“Just a Gigolo”), Louis Jordan (“Is You Is or Is You Ain’t My Baby?”), and The Treniers (“Poontang”). Though certainly no rocker himself, Prima was unique among his peers and/or contemporaries as not being possessed of antipathy toward rock’n’roll.

He had only one son, Louis Prima Jr., born 1965. Not surprisingly, given his name, Louis Jr. took up music at an early age. Certainly influenced by his father, Prima Jr.’s style synthesizes the swing/jump aesthetic with elements of rock. His career had been on-and-off (with detours into straight careers) until 2010, when he went full-time with music, releasing his first album with The Witnesses (a band using the name of Louis Sr.’s old group).

On Blow (his second full-length), Prima continues his hybridized style, combining new material with covers of some of his dad’s lesser-known material (the Prima-Sr.-doppelganger “That’s My Home,” “Robin Hood”). The newer songs have the flavor of both Las Vegas and New Orleans (the two cities in which Prima grew up), mixing in tight, joyous horn section work and stride piano with splashy drumming, massed vocal choruses; it’s all designed for dancing and general fun and merriment.

Less retro-minded than one might expect, Blow has a toehold in enough timeless styles that it holds up as a modern listen, not an exercise in nostalgia. Following his father’s lead, Prima Jr. features a female vocalist (Leslie Spencer) on selected tracks including the torchy “Someday.” A sort of audio verite vibe is achieved with bits of studio chatter bookending some of the songs. And a well-chosen cover of Adam and the Ants‘ “Goody Two Shoes” fits into Prima’s style perfectly. And with its punchy horn blasts, insistent beat, electric guitar wails and Spencer’s assured belting, “I Just Wanna Have Fun” is a succinct summation of Blow‘s overall approach.