Book Review: The Evolution of Mann 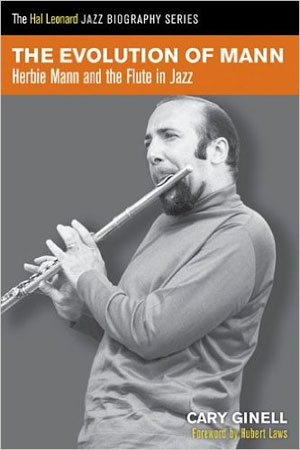 Lately I’ve been mulling the age-old question: what makes a bandwagon-jumper? Pop music’s history is filled with examples of bands and solo artists who have adopted stylistic u-turns in a naked bid for the commercial brass ring. Perhaps The Bee Gees are the most celebrated example: though they started out as a Beatles-lite sort of act in the 60s (and proved they could rock when backing Ronnie Burns; see Nuggets II for proof), they jumped on the disco bandwagon and reaped serious financial rewards for their trouble.

And then there are the artists who are constantly changing if only to amuse themselves. David Bowie and Neil Young have both built careers around stylistic reinvention, and both were (often but not always) rewarded with both commercial success and critical plaudits.

Such career reboots – of the commercial or artistic kind – are far less common in the jazz idiom. But the jazz artist who first comes to mind when one thinks of hopping from style to style is flutist Herbie Mann. Biographer Cary Ginell (also author of an excellent Cannonball Adderley bio, part of the same Hal Leonard Jazz Biography Series) takes a look at Mann’s long and storied career in the punningly titled The Evolution of Mann: Herbie Mann and the Flute in Jazz.

Though Ginell was lucky enough to have interviewed the flutist extensively several years ago (Mann passed away in July 2003), he steered clear of the sort of over-familiarity that leads to hagiography. Ginell is an unapologetic fan of Mann the man and Mann the innovator, but he doesn’t make outsized claims about the flutist’s musical abilities. No, in fact, he quotes many of Mann’s former associates as being somewhat unimpressed with his chops, his ability to improvise. But none of that takes away, Ginell argues (and I would agree) from Mann’s accomplishments. What he did do was establish the flute as a legitimate instrument in jazz, and the flautist (as opposed to a player who seconds on flute) as a legitimate jazz player. For that alone he should be honored.

Moreover, Mann’s endless restlessness did result in some pretty fine music. Herbie Mann at the Village Gate (1961) is an exemplar in the soul jazz subgenre, and Memphis Underground (1968) is an incendiary set that features both Larry Coryell and the waaay-out-there guitar sounds of Sonny Sharrock.

Mann wasn’t always admired – much less taken seriously – by his peers, but he was known for crowd-pleasing, and for paying his sidemen atypically well. But back to the question of bandwagon jumping: Mann was an early proponent of the bossa nova movement that swept the USA in the very early 60s, but because of label delays and other factors, his releases came out later than, say, the Getz/Gilberto stuff. And others – notably Adderley –were well into the soul jazz bag before Mann was. As such, Mann was often criticized for following trends rather than setting them.

But, he might well have asked, what’s so bad about that? Mann was always more interested in making the fans happy. He adopted a rock star persona (one look at the cover of 1971’s Push Push makes that clear), with all the groupie-excess that connotes. By the 70s he had hitched his musical wagon to the disco train, and while his credibility took a big hit, he sold lots of records, and lots of concert tickets. And he doubtless got laid a lot.

Ginell charts Mann’s rise and fall (and sort of post-fame rise) with a reporter’s eye, drawing on interviews with those who knew him best, most notably selected sidemen and Mann’s third wife. Ginell recounts how, in Mann’s waning years as he dealt with prostate cancer, the flutist re-engaged with the ethnic sounds most dear to him. And in reconnecting with his earlier Brazilian musical bent (plus the music of his Eastern European roots), Mann – intentionally or not – made a final compelling case for his stature as an innovator in what we now call world music.

Ginell never paints his subject as a hero or a world-class musician, but he makes a strong case for Mann’s importance thanks to his popularization of his instrument, and for his role in the mainstreaming of ethic sounds into the fabric of American pop and/or jazz.