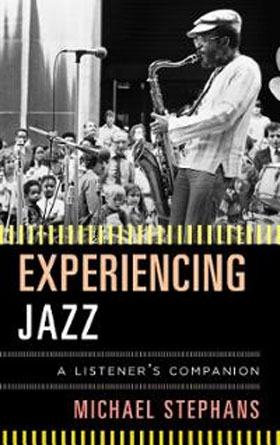 As part of my expanding odyssey of discovering the art form called jazz, I bought a book in December 2012, a title called Jazz 101: A Complete Guide to Learning and Loving Jazz, by John Szwed. It was good, but left me feeling that the task of guiding a novitiate (one such as myself) into a greater appreciation of jazz could have been done better.

So I was quite intrigued when I received a list of new offerings from Scarecrow Press / Rowman & Littlefield. That list included Michael Stephans‘ Experiencing Jazz: A Listener’s Companion. Seeing that it was a hardcover at just shy of 500 pages, I figured that it would provide a more comprehensive overview than did the earlier title. At least the potential was there, I surmised.

And I was right. Stephans is a jazz drummer with an impressive musical pedigree of his own, having shared the stage with a long list of notables. He’s also a teacher at the college level, and his conversational, informal tone avoids the stuffy, academic approach from which too many of these sorts of books suffer.

While taking pains to offer disclaimers that his early chapters do not represent anything like a comprehensive history of jazz, Stephans does an admirable job of charting the form’s genesis, rise and development. And he does it all in about 45 pages. As such, it’s a breezy survey that never dwells too long on any one subject. While a reader well-versed in jazz history might find it wanting, it’s quite effective at achieving its stated goal of providing a potted history (my words) of jazz for the newbie.

It’s after this series of introductory chapters that Stephans really gets to what seems to be his true focus. After discussions of functions and forms, and big vs. small bands, Stephans devotes a chapter each to the instruments employed in jazz. These chapters include trumpet; trombone; tenor sax; alto sax; soprano and baritone saxes; clarinet, flute and bass clarinet; piano; bass (acoustic and electric); drums; other percussion (vibraphones etc.); guitar; and vocals. In each, Stephans breezes through the instrument’s development within the jazz idiom, discusses major artists in each, provides a survey of current artists, and spends a few grafs on young up-and-comers. Each chapter includes a brief Q&A with one current artist (the same questions are posed to all players).

It’s a lot ot take in, but a tome with the ambitious goal of providing a single-source introduction to jazz can be nothing less. The reader will come away hungry to sample those artists with whom s/he was previously unfamiliar, and I’m certain that was part of Stephans’ goal. If there’s a criticism of Experiencing Jazz, it’s the ever-so-slightly too-reverent tone the author takes when discussing currently living (or recently passed) musicians, most notably those with whom he’s either worked or conversed. In some of those cases, the reader might squirm – but just a bit – as Stephans tells us just what a wonderful human being so-and-so sax man truly is. But as I say, it’s a minor criticism, one with which many other readers might well disagree.

As a very successful attempt to draw interested parties into the world of jazz, Experiencing Jazz is highly recommended.