Book Review: Bird: The Life and Music of Charlie Parker 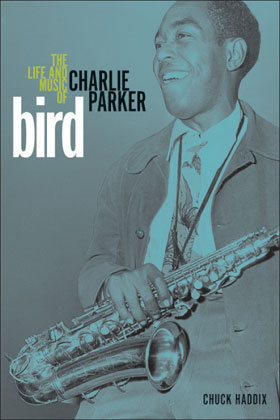 If you’ve been living and paying any attention to the human condition, you understand that people are complicated. We’re inconsistent, unpredictable, messy creatures. And even if one focuses on the “special” ones – those who excel at one thing or another, who are led up as exemplars of some sort – what’s inevitably found are flawed characters.

So it was with Charlie Parker. “Bird” is rightly honored as one of the most important names in jazz – specifically bebop – but wow, was he one messed up character. Writing a book that honors the first argument yet faces up to the second is no easy task, but with Bird: The Life and Music of Charlie Parker, Chuck Haddix has hit a home run. Drawing on exhaustive research, Haddix has written a life-to-death biography that shines a bright light into the dark corners, while never ignoring the high points of the saxophone player’s life and work.

Who was Charlie Parker? Well, as Haddix’s portrait paints him, he was both a virtuoso and a thoroughly unprofessional musician. He was a doting lover and an incurable philanderer. He was a cheat, a liar, and a man who (sometimes) honored his word. He was a visionary bandleader and a guy who couldn’t hold his bands together. He was a lifelong abuser of heroin and alcohol, and a sick man who routinely self-medicated when “legitimate” medicine seemed not to help him.

But above, below and around it all was the music. Haddix charts the arc of Parker’s relatively short life and career (the man died in his early thirties, though the doctor who pronounced him dead judged him to be in his fifties) is a manner that puts the music first, yet weaves Parker’s personal and professional life into the mix to create a deeply textured portrait of the man.

The world of jazz (in the post WWII era especially) was a fairly small community. So it is with Haddix’s story that we find Parker interacting, Zelig-like almost, with nearly every “name” artist in jazz. But of course Bird was no bystander: he was often at the center of what was happening. He consistently both amazed and infuriated his contemporaries, most notably (though for different reasons) Dizzy Gillespie and Miles Davis. And even though Bird is centrally about Parker, the author’s storytelling provides insight onto the character and demeanor of those who rotated into (and out of) Parker’s orbit as well.

Haddix is never sentimental, rarely rhapsodic, yet never clinical and sterile in his storytelling. So while Parker’s early demise is charted from the beginning as largely inevitable, the author avoids hamfisted foreshadowing and simply gets on with his detailed story.

One need not be a jazz fan to appreciate Bird; even at less than 200 pages, the book touches on so much American postwar cultural history that it’s essential reading for anyone interested in 20th century America. Perhaps the only criticism of Bird is its lack of a discography, but of course that can easily be found elsewhere. Adorned with thorough research notes and a stunning cover, Bird: The Life and Music of Charlie Parker is highly recommended.