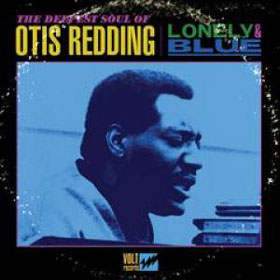 Released in 1966, Lonely & Blue was perhaps Otis Redding‘s finest collection of songs centering on the heartfelt, pained end of the soul balladeering spectrum. With its trademark packaging design – as distinctive in its own way as the aesthetic of jazz giant Blue Note – the Volt Records release captured everything that made Redding and his label so highly regarded. Right down to the brief liner notes from Detroit deejay Marty Hackman of WDHJ-AM, Lonely & Blue was as fine a time capsule of the whole mid-sixties Stax/Volt vibe as you’ll ever find in a used record bin.

Except, of course, for one small fact: the album Lonely & Blue never existed…until now. It’s a cleverly (and lovingly) crafted pastiche of a 1965-66 LP. The folks at Concord Music Group – curators of much of the Stax/Volt catalogue along with portions of the work of Frank Sinatra, Ray Charles, and Tony Bennett (not to mention jazz label catalogs of Fantasy, Riverside and others…they pick well) – have pulled out all the stops to create an album-that-never-was. And the result is one that well should have existed long before now.

Yes, all the packaging and song selection is spot-on. All of the the creativity and imagination lacking in Concord’s recent perfunctory Tony Bennett release As Time Goes By was apparently saved up and expended instead on Lonely & Blue. Even the cover: the art is faux-worn to show the impression of the vinyl record within its sleeve. Of course this art-director’s trick has been used on countless albums before, but here it seems somehow even more apropos.

But in the end, none of this would matter if the music wasn’t superb. Since we’re talking about Otis Redding – quite possibly the greatest soul singer ever to roam this Earth – it’s tough to go wrong. But the compilers worked hard to create a record (yes, a record: Lonely & Blue will be released on limited-edition blue vinyl in addition to the CD and digital versions) that is sequenced to feel like a mid-sixties release. On the down side, that means it’s not stuffed to the 80-minute digital limit with songs; twelve cuts, six per “side.” And in keeping with the theme – emotion-laden ballads – if there are hits, it’s only by coincidence. No “Dock of the Bay” here: as compilation producer David Gorman says, “There are a few hits on the album, but they’re there because they fit the mood, not because we wanted to include the hits.”

The result is that “I’ve Been Loving You Too Long” and “Send Me Some Lovin’” sit right alongside lesser-known tracks like an alternate take of “I’ve Got Dreams to Remember.” These are slow-burn songs, not uptempo soul ravers. Thematically unified and full of great music, Lonely & Blue truly is a modern-day rethink of the way to market Redding’s music to the masses. And it poignantly suggests – by design or by coincidence – the marketing approach Stax/Volt might have taken with him had he not died so tragically and prematurely in 1967.