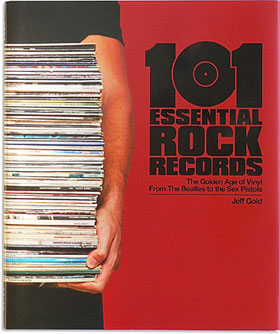 I’m predisposed to like a work such as Jeff Gold‘s new book, 101 Essential Rock Records: The Golden Age of Vinyl from The Beatles to the Sex Pistols. Anything that connects with my interest in music and words-about-music has a better than even chance of finding favor with me.

But this book is special beyond that. A lovely coffee-table book with high-quality color printing throughout 101 Essential start off on the right foot: it looks fantastic (great cover art) and feels substantial. So before it even gets opened, it impresses.

Then we get to the table of contents, and discover that the essays – and there are lots of ’em – are penned by some of rock’s more serious thinkers. People who are primarily recordings artists (Graham Nash, Iggy Pop, Robyn Hitchcock, David Bowie, Johnny Marr, Devendra Banhart, Suzanne Vega and more) weigh in on some of their personal favorites (these tend toward the usual suspects – Beatles, Velvet Underground, Pink Floyd – but for good reason). And luminaries in the rock biz and/or rock journo biz (Elektra’s Jac Holzman, Joe Boyd, Jon Savage) have interesting things to say about some less-covered critical favorites (Nick Drake, Moby Grape).

And it’s hard to quibble with most of the hundred-and-one selections: while serious rock fans (this writer included) could likely predict at least half of these without peeking, the brief mini-essays help make the case for any stray doubters.

The photography and layout are peerless; there’s plenty here even for those (like me, again) who have the majority of these vinyl records on their home shelves. For the more casual fan – the type of person who loves The Who, Stones, Cream and the Grateful Dead – some of the albums mentioned here may send them to their nearest used record store (or, less wonderfully, Amazon, iTunes, or Spotify). It’s nice to see Davy Graham, The Butterfield Blues Band‘s landmark East-West and The Damned get coverage. For every The Dark Side of the Moon and Pet Sounds, readers will find Faust and Skip Spence‘s Oar.

Sure, one can imagine some of the editorial meetings that must have occurred when storyboarding 101 Essential: “Okay, we know we have to include a Zappa/Mothers album, but which one? Freak Out? Hot Rats? Roxy and Elsewhere?” (They chose Freak Out.)

For hardcore types, there will be a small tinge of smug satisfaction (“See? I told ya Nursery Cryme was great!), and those same types (like me, yet again) will probably shudder at the inclusion of at least one perceived unworthy release (for me it’s Fleetwood Mac‘s Rumours). But the book will spark memories and conversation. It’s a real winner. A few surprises are in store in its pages, but I’ll leave those for you to discover on your own.

If you haven’t blown all of your holiday cash, you’d do well to pick up a copy of 101 Essential Rock Records.