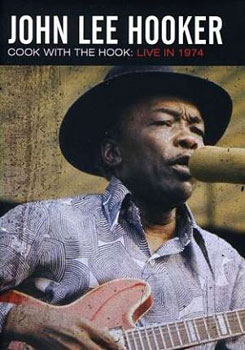 “Do you wanna boogie? Do you wanna cook with the Hook?” So implores John Lee Hooker on the audio track of the DVD menu on Cook With the Hook: Live in 1974. A medium-sized festival (historical accounts say 6000 fans, but the video suggests more like a thousand) in Massachusetts was the setting for an outdoor concert featuring Hooker and a solid backing band. The event was captured on black-and-white videotape by three cameras. The video quality is pretty poor; it was shot reasonably well, but the ravages of time have not been kind to the tapes. The audio, however, is a very different story: a fine, clear mix that give proper prominence to Hooker’s voice and guitar.

The band follows Hooker through a half-dozen tracks (this is a fairly short 45-minute program) with the right balance of precision and looseness. The backing players take their spotlights; the second guitarst even takes the lead guitar on “Sweet Sweet Thing,” and a lightning run on “Boom Boom.” (Funnily enough, during the latter, Hooker just sits there and doesn’t play a tall. Apparently he’s enjoying the solo as much as modern-day listeners will.

Much is often made of Hooker’s “metrically free” approach to the blues, in which the meter of the song is built around the lyrics, rather than the lyrics being set to a, say, twelve-bar framework. And while that’s true here on “Whiskey & Women,” for the most part – possibly owing to the impromptu nature of the performance – the songs on Cook With the Hook do tend to stick more toward standard blues changes. It’s also a bit strange seeing one of the musicians (the third guitarist) playing a Rickenbacker, an instrument rarely associated with the blues.

The liner notes make the point that this broadcast has not appeared before as a “grey market” (aka bootleg) item; no matter how hardcore a Hooker fan you are, you haven’t seen this show before now unless you caught it on local TV back in 1974.

What the liner notes don’t provide is any information as to the identity of the band members. True, it was a long time ago that this concert took place. What little historical data there is comes from some found newspaper clippings.

The setting for this show is nothing if not strange: the concert took place in a landfill, and the concertgoers are kept away from the band by means of a wooden fence. Throughout most of the performance, Hooker remains seated behind wide-brimmed hat and sunglasses, riffing away on his delightfully distorted ES-335. (He does get up, put his axe down and work the audience during “Boogie.”)

There are occasional audio deficiencies: during “Boogie” the lead guitarist all but disappears from the mix. You can see him falling away, but you don’t hear much. The audio is a bit better when the bassist takes a solo(!). It’s up to the viewer/listener to decide if that’s a good thing or not.

Here Hooker is shown as a man with little or nothing to prove, and he just gets on with it. The quick-cut edits between the three cameras bear little or no connection to what’s happening visually; they’re seemingly random, and more than a little jarring. But fans won’t be put off by the dodgy video production values; this DVD is both historically important and musically rewarding.

A quick postscript: as the concert ends, the emcee shots out to the audience, “A man in his fifties, and he can still rock’r’roll! Imagine that!” Well, I thought it was funny. It was the 1970s, after all.

You may also enjoy my review of John Lee Hooker’s CD Anthology: 50 Years.