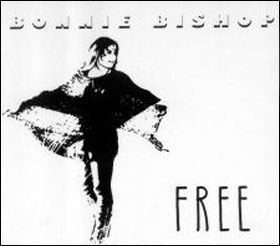 Wikipedia tells me that Bonnie Bishop is a country rock singer/songwriter. That may well be, but her musical vocabulary as presented on her debut Free suggests that “country rock” is a criminally limiting label, at least for Bishop. “Keep Using Me” does have echoes of Bonnie Raitt (a fan, by the way), John Hiatt and others who might best be labeled “adult alt-Americana” or something equally unwieldy.

Point is, Bishop’s a strong vocalist, and several of the songs on Free rock. For the most part, this ain’t boot-scootin’ stuff: “Shrinkin’ Violet” owes as much to soul and Southern rock as it does to anything coming out of Nashville. (Well, okay: IHOF, the studio where Free was cut, is in Nasville. But still.) Ther’s some wailing slide guitar on “Shirink’ Violet,” but Bishop deftly pivots to an emotive, swaying midtempo ballad on the title track. She exhibits great control over her voice, sprinkling melismas here and there, but not in that overwrought TV-talent-show sort of way.

“Bad Seed” is much more in a country vein, and scores extra points for wry, clever lyrics that play well in the story-song tradition. “World Like This” is a sultry torch number with hints of gospel, built around some deeply soulful piano and organ work. “Best songs Come From Broken Hearts” starts quietly and benefits form an excellent use of slowly-building dynamics. And “the album closer “Right Where You Are” ties together every style Bishop has in her bag of tricks, resuting is something that feels a lit like an uptempo female-vocal led take on Elton John‘s Tumbleweed Connection period.

If there’s a criticism of Free, it’s that it’s a bit on the short side (seven tracks total). But seven strong tracks always beats the hell out of a longer album padded with filler.

Those whose tastes don’t typically run toward Americana will still find a lot to like on Free, but Bonnie Bishop’s music is rooted firmly enough in the best country traditions so that c&w and Americana fans will likely dig this as well.