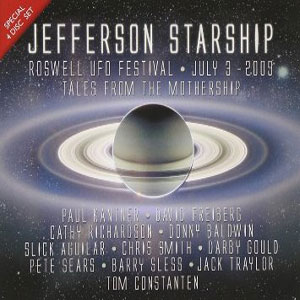 Where to start with this one? There’s so much I could say about the sprawling 4CD set Tales From the Mothership. But let’s start with a bit of history to contextualize things.

Tales From the Mothership is credited to Jefferson Starship. Note that’s not Jefferson Airplane, the group that gave us the hit versions of “White Rabbit” and “Sombody to Love” as well as “Volunteers” and “Wooden Ships.” But all four of those songs do appear in one form or another on this set. No, this is the Starship, the group that grew out of the ashes of the Airplane upon its early 70s demise. But it doesn’t sound a bit like – nor does it feature most of the musicians from the era – the 70s pop group that scored hits with “Play on Love,” Miracles” and other AOR tunes.

Right: no Grace Slick (she’s long since completely retired from music), and no Mickey Thomas (if you’re not confused yet, he has or had a group called Starship Featuring Mickey Thomas). But lest I use up my allotment of zeroes and ones telling you what this isn’t, here’s what it is: Jefferson Starship circa 2009 (the time of this live recording, made in Roswell, New Mexico at an annual UFO festival – no, really) is a group led by Paul Kantner, original member and primary songwriter in both Jefferson Airplane and Jefferson Starship. This particular aggregation is, both musically and conceptually, a continuation of the kind of thing Kantner did on the very first Jefferson Starship album, 1971’s Blows Against the Empire. On that record, Kanter (and Grace Slick) put together a loose aggregation of like-minded musicians (including members of The Grateful Dead) to perform their science-fiction-themed songs.

That’s the kind of thing that is – to a certain extent – on order here, and in fact a suite of tunes from that LP are included on the third of these four discs (more on what’s where, forthwith). So the sci-fi angle means that it’s something of a good fit to have the band appear at a festival saluting Area 51. Or, I guess it is.

The set is designed to appeal to adherents and fans of taper culture: while the actual performance fills the second and third discs (divided into a nominally acoustic and a fully electric set), the 4CD package also features an entire CD’s worth of rehearsals (in low fidelity, even) and a fourth disc of dodgy soundcheck performances. One hopes that the band knows its core audience better than I do: it’s hard to imagine who would want to listen to the first and fourth discs more than once. Truth be told, one listen is tough enough going.

But more on those in a moment; let’s concentrate on the performance discs. The show opens with a short set by Tom Constanten, perhaps most famously known as The Grateful Dead Keyboardist Who Lived. He turns in some thematically relevant but otherwise odd song choices: The Bonzo Dog Doo-dah Band‘s “I’m the Urban Spaceman” (mis-titled in the packaging as “Urban Space”) and the novelty smash “The Eggplant That Ate Chicago.” But he also does an early Dead tune, “Mountains of the Moon.” Truth be told, he’s a good enough musician, but there’s nothing especially distinctive about any of these performances.

Next up is Jack Traylor, a folk musician who – we’re told – was a big influence on Kantner. Well, assuming that the arrangements of some of his songs are true to his original versions, I get it: the familiar chord figure upon which “Volunteers” and “We Can Be Together” (and, it seems, perhaps a few too many other Airplane/Starship tunes) are built does crop up in his songs. He’s an earnest foklie in the Burl Ives mold; your liking for that sort of thing will be a good indicator of your likelihood of enjoying Traylor’s set.

A set of Airplane numbers given a more acoustic-leaning (as opposed to actually acoustic) arrangements comes next. What’s oddest about these is the participation of two vocalists, Cathy Richardson and Darby Gould. They both sound like tied-for-first-place winners in a Grace Slick sound-alike contest. Slick’s hallmark approach – strident vocals with a ton of controlled yet liberally-applied vibrato – is on full display here. The thing is, after awhile they come off as almost a parody: even Grace didn’t turn on the trademark vibrato as much as these two. It’s as if they’re needing to consistently remind us that, hey, we sure do sound a helluva lot like Grace, don’t we. What’s thrilling for the first few songs becomes a bit unnerving after awhile.

The third disc includes the “electric” set. Again with the supposedly thematic cover songs: The Grateful Dead’s “Dark Star” gets a doppelganger reading, though it’s mercifully brief; and a few songs from Pink Floyd‘s The Dark Side of the Moon are featured. A longish number called “(Paul Kantner’s) Science Fiction Movie” could also be titled – if one were feeling sarcastic – “Not Quite as Dark Star.” The set also gives us a horrifyingly sloppy reading of David Bowie‘s “Space Oddity,” and – finally delivering some real rock to what’s otherwise a slow- and midtempo set of tunes – some Jefferson Airplane hits to close the set.

The rehearsals on the first disc are performed pretty well, and if one can listen past the bootleg-quality fidelity, they’re enjoyable. The sound check is another story altogether: why anyone would wish to hear the band break down mid-song while making sure mix levels are right, it’s hard to know. The sound check does serve to prove that the band could actually get “Space Oddity” right; the actual performance version shows that for whatever reason, they completely lost their way.

Both the live performances and the behind-the-scenes material feature all manner of onstage patter, lots of what-shall-we-do-next muttering, and the like. For fans of that kind of thing, Tales From the Mothership will be a treasured addition to the CD shelf. Most others would likely prefer a double-disc, or – better still – a single CD putting the spotlight on the best bits.