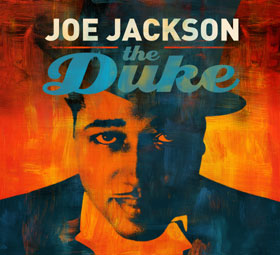 Tribute albums are, quite often, dodgy things. Many are ill-conceived and/or put together with profit as the only motive. I know of one recent tribute album in particular that really perplexed me: admittedly, the artists being paid tribute did indeed have a number of hits and critically-lauded songs several decades ago. But the artists paying said tribute had little to do with that group’s music; they weren’t influenced by it in any obvious way. Moreover, a particular sonic characteristic of the subject-act was all but completely missing from any of the cover, er, tribute versions. And most importantly, the new versions – though they do feature some big names – don’t add anything to the discussion. If anything, they lead the listener to say, “Wow, this version is pretty weak. The original was a whole lot better. I think I’ll go dig out my old vinyl.” In the end, I’m left wondering: who are these albums for? Not for me, mostly.

All of which leads me to make an effort to describe a new album titled The Duke not as a tribute to Duke Ellington and his music, but instead merely the latest Joe Jackson album, full of songs that happened to have been written (in whole or part) by the legendary American bandleader. Strictly speaking, yes, it’s a tribute album. And yes, it’s the sort which features (shudder) all manner of guest artists from (shudder again) a wide range of genres.

Simply reading the list of guest artists on The Duke may intrigue you: Sharon Jones, violinist Regina Carter, and on many tracks, Ahmir “?uestlove” Thompson from The Roots. And then things get a little weird: Steve Vai, Iggy Pop. The thing is, with the possible exception of Iggy, all of the artists seem well within their element, and their presence enhances an already good rendition of a classic Ellington tune.

Jackson’s not a slavish devotee to the original arrangements, though heaven knows it’s well within his abilities to be one. As far back as Jumpin’ Jive (1981) the pianist made clear his deep love and equally deep understanding of jazz (especially the swinging, pop end of it). His soundtrack work on Tucker: The Man and His Dream (1988) showed that not only could Jackson faithfully recreate the styles of old, he could write original numbers that fit comfortably alongside them.

So it’s not a major leap for him to take a slightly different tack here, and reinvent (to varying degrees) Ellington’s music for the 21st century.

Sexy percussion, a lush synthesizer bed and Jackson’s distinctive piano tone provide the backing for some lovely guitar work from Steve Vai on “Isfahan.” The tune is updated in a way that calls out its most timeless qualities; there’s nothing old-fashioned about it.

“Caravan” is among Ellington’s most well-known numbers (and it’s among the most widely known tunes in all of jazz), so one might predict that Jackson would play it a bit safe here. But no: An aggressive bass guitar line plus lots and lots of percussion – along with a crack string section – transforms the classic into something highly dramatic; the piece has a vaguely Eastern feel to it, a quality that’s enhanced by vocals in Farsi. Jackson’s outside-the-box approach is astoundingly effective.

A medley of “I’m Beginning to See the Light” plus “Take the ‘A’ Train” and “Cotton Tail” marks the disc’s first vocal appearance by Jackson. The tune swings, and Jackson’s vocals fit like a glove. Carter’s warm violin engages in some tasty interplay with Jackson’s (judiciously-applied) piles and piles of keyboards.

The same lineup tackles “Mood Indigo,” which leans a bit closer to the classic bluesy arrangement. The instrumental “Rockin’ in Rhythm” has a lively New Orleans feel to it; every instrument is engaging in activity interesting enough on its own, but it all comes together nicely.

Sharon Jones’ vocal spotlight is a pairing of “I Ain’t Got Nothin’ But the Blues” and “Do Nothin’ ‘Til You Hear From Me.” Jackson’s band does a fine job of backing Jones without aping the Dap-Kings; in Jackson’s hands the song’s arrangement takes the form of a sexy, smoky, soulful number. An instrumental midsection is wonderfully expressive.

Jackson slows “I Got It Bad (And That Ain’t Good)” way down for a melancholy reading that puts his voice, the string section and the congas of longtime associate Sue Hadjopolous out front. Some lovely, understated harmonica is the finishing touch on the track. The band goes for a samba vibe on “Perdido / Satin Doll,” going so far as to have vocalist Lilian Vieira translate the lyrics into Portuguese. Arrangement-wise, this track is the point – the only point, actually – at which Jackson’s music sounds much like it did in the 80s. But there’s a left turn: a lengthy solo piano break is also the most traditionally-minded thing on all of The Duke.

Vai is back for a reading of “The Mooche” and “Black and Tan Fantasy.” Here, his multi-textured guitar overdubs display his mastery; those who think they wouldn’t like Steve Vai playing Duke Ellington should think again and give this slow-burning track a fair listen. The trad-minded breaks in the song serve as an effective counterpoint; Vai’s musical dialogue with Dorothy Lawson‘s sawing cello is fascinating.

The Duke closes on an odd note. “It Don’t Mean a Thing (If It Ain’t Got That Swing)” is a reasonably solid choice for a collection such as this, and Jackson’s arrangement is typically top-notch: both tasteful and exciting. But Iggy Pop’s semi-spoken vocal sparring with Joe doesn’t really work all that well. Joe scats in places, and Lilian Vieira adds some delightful doo-wahs, but Ig’s gravelly “absolutely” and “all right” don’t add much at all. Jackson’s vibraphone solo is nothing short of thrilling, though. And in the end, if you didn’t know to listen for Iggy, you’d hardly notice his exceedingly brief phoned-in bits. I’d estimate that the sum total of his presence on the track clocks in under ten seconds. Maybe five.

Despite a (quite minor) misstep of Iggy’s involvement (as a fan, I’ll note that his considerable talents lie elsewhere), Joe Jackson’s The Duke is one of the most compelling, fascinating releases of 2012. Tribute or no, it’s a winner.