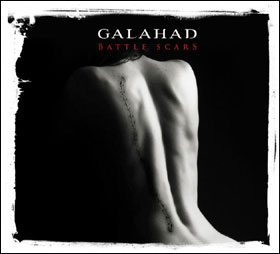 File Galahad under that growing list of accessible progressive rock acts that had (up to now) escaped my notice. Apparently they’ve been around for some years; their debut In a Moment of Complete Madness came out way back in 1993. Of course, had I heard them at the time, I might have dismissed them entirely: in those days they sounded very much like Rush, a band that – for all their admitted talents – I’ve never been able to endure.

But on 2012’s Battle Scars, Galahad sounds like a completely different band. Flourishes of symphonic prog adorn the opening title track. Lyrically the song is a bit repetitive, but the playing and arrangement are exciting enough to carry the tune. Assertive yet breezy vocal harmonies, some nice touches of Mellotron, and an angularly percussive midsection all add interest.

The guitar figure upon which “Reach for the Sun” is built recalls – of all things – The Easybeats‘ 1966 hit “Friday on My Mind.” The track is mostly instrumental save for the odd “na na” and two lines of lyric that serve to link it thematically with the title track (is Battle Scars a concept album?) but it’s a dramatic piece nonetheless.

Some modern sounds blend nicely with more classic string-synth textures on “Singularity,” a tune that suggest that the guys in Galahad have been listening to Porcupine Tree. Not really derivative of Steven Wilson‘s peerless group, the track does bring together the elements that bridge the gap between classic and 21st century progressive rock: a propulsive, accessible beat and plenty of thrilling sonic variety.

The Porcupine Tree vibe is even more pronounced on “Bitter and Twisted.” A throbbing synthesizer line recalls Richard Barbieri‘s work on Fear of a Blank Planet, but once again, Galahad isn’t ripping off anyone; a strong melody, some dramatic vocals from Stuart Nicholson and precise/complex drum work from Spencer Luckman show that Galahd have plenty of good musical idea of their own. Halfway through the track, the band takes off on a brief prog-metal excursion that’s both doomy and tuneful.

Dean Baker‘s washes of distorted organ kick off “Suspended Animation; that leads into some rubbery bass work from Neil Pepper; and that leads into some Roy Keyworth stacked guitar overdubs that recall Steve Hackett‘s work with Genesis. The tune itself has a sinister, smoky feel.

“Beyond the Barbed Wire” has all of the tasty elements of the other songs on Battle Scars, and adds the hookiest melody to the mix. It’s an effective mix of crunchy, rockin’ out sections and ethereal synth-and-vocal washes. The anthemic album closer “Seize the Day” features a kinetic synth arpeggio and another accessible melody.

A 2012 remake of the group’s 1995 track “Sleepers” is included as a bonus track; I haven’t heard the original, but the 2012 version is very much of a piece with the other tracks on Battle Scars, though it does allow the players a bit more space in which to stretch out and display their impressive chops and tight ensemble playing. In places “Sleepers 2012” is reminiscent of another fine modern prog group, Knight Area.

Virtually free of the qualities that sometimes put listeners off of progressive rock – pretentious themes, over-emotive vocals, showy playing that calls attention to itself – Galahad’s Battle Scars shows that this UK band has learned a thing or two in the past twenty years. Recommended.