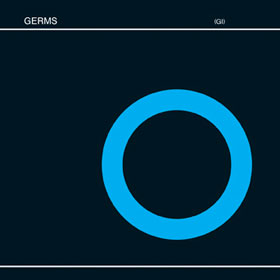 I’ve remarked upon this phenomenon before, and it continues to amaze me. What was once in the late 1970s considered really edgy – unmusical even – today sounds fairly mainstream. I hear that in the music of Sex Pistols, Public Image Ltd (coincidentally[?], those two acts were fronted by the same vocalist) and I hear it again listening to (GI), the sole album released by The Germs during their brief time together.

Led by Darby Crash, The Germs are generally described in rock histories as L.A. hardcore punk. And I suppose that’s true; there weren’t a lot of bands doing this sort of thing in 1979, and the Los Angeles variant of punk did seem a good bit angrier and just plain in-your-face than did the New York City version (Ramones). But then maybe it was a West Coast thing, because The Avengers were pretty amped-up as well.

None of which is to suggest that The Germs were a poppy, tuneful lot. Their short (sometimes extremely so) songs careen and smash about. Pat Smear manically strums power chords, bassist Lorna Doom often sounds as if she’s struggling to keep pace with Smear (to her credit, she pretty well does), and drummer Don Bolles holds down the beat in a style that influenced (or at least presaged) the approach of countless hardcore/punk drummers to follow in The Germs’ wake. (Special notice to Bolles’ impossibly speedy work on “Dragon Lady.”)

Sometimes the songs on (GI) do have a basis in pop. Slowed down, “Richie Dagger’s Crime” could almost be a pop song. But Crash’s raspy wail is mostly free from standard conventions of such niceties as melody, so things stay firmly on the punk side, no matter how catchy the tune might be. “Lexicon Devil” sounds a lot like early Ramones, albeit with any and all traces of bubblegum scraped from the shoes of the band. Occasionally on (GI), The Germs move in some intriguing directions; one wonders what might have happened had they remained together and pursued the almost-powerpop style of “The Other Newest One” or the bluesy(!) approach of the nine-minute-plus(!) “Shut Down (Annihilation Man)”.

The production on (GI) – courtesy of one Joan Jett – is almost audio verité: set the band up, get a few levels, and let the tape roll. There’s no real sonic variety in the production (or arrangement) aesthetic on (GI), and that’s almost certainly by design. Any filigree would sound wildly out of place here, anyway. Nearly every song stops on a dime; there are no fadeouts or washes of reverb.

Richie Unterberger‘s succinct essay – based in part upon a contemporary interview with Bolles, as Crash’s 1980 suicide rendered the vocalist unavailable for comment – provides some welcome context for the music, and some photos of the band reinforce the notion that most people probably wouldn’t want to spend a lot of quality time with these real-deal punks. Real Gone Music’s all-cardboard gatefold packaging reproduces the original (GI) album art, complete with lyrics and professional band head shots, including (most notably) a teen-idol shot of Darby Crash.