Book Review: The Me Generation…By Me 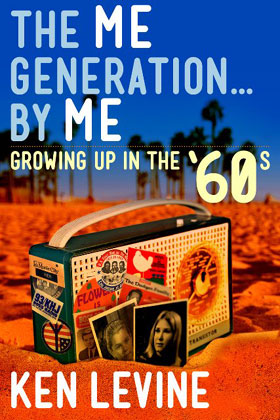 As someone who (a) is a writer and (b) grew up immersed in the pop culture of the 1960s, Ken Levine would seem ideally suited to write a book about that decade. That he’s a comedy writer (M*A*S*H, Cheers, Frasier and host of other well-known shows) would suggest he could deftly weave humor into such a book. And in fact those assumptions are not too wide of the mark. Levine’s new book The Me Generation…By Me: Growing Up in the ’60s is a first-person account of Levine’s experiences in that legendary decade. He grew up in suburban Los Angeles – one of pop culture’s epicenters during that era – and went to school with any number of people who would go on to fame of their own.

Early on – Levine’s three-page introduction is one of the best things about the whole book – the author sets out his unique point of view: he asserts (correctly, of course) that he, like most people who lived through the 60s did not in fact “…attend Woodstock, move to Haight-Ashbury, protest the war by burning […] bras or banks, or form a band that played Woodstock.” Levine’s story is told from the point of view of Everyman. Every man who grew up in Los Angeles, worked at a college radio station, and had a schoolboy crush on classmate Ann Jillian, that is.

Perhaps surprisingly, given his professional background, Levine’s writing style is rarely laugh-out-loud funny. He has an acerbic tone not completely removed from the approach of Bill Bryson, but his writing in The Me Generation rarely crackles with wit. Instead, it’s a solid, mildly/occasionally humorous account of his formative years, a time filled with frustration, rejection, missed opportunities and a clutch of memorable episodes. In other words, The Me Generation is a lot like real life: sometimes funny, sometimes sad, sometimes more interesting than others.

Levine throws in the occasional provocative aside – he wasn’t impressed, for example, with many of your favorite groups from the 60s; instead The Mamas and the Papas were just about his favorite act. But mostly, he strings together a chronological narrative of the era from his personal point of view as a young man. He’s neither Zelig, Forrest Gump, nor a character in a 1970s John Jakes novel series: The Me Generation is not filled with tales of Levine meeting – let along hanging out with – Jim Morrison, Rodney Bingenheimer or Kim Fowley. Instead, the young Levine does cross paths with a number of radio jocks, experiences that would influence his subsequent career choices.

Though The Me Generation is told in mostly chronological order – no Ken Kesey he – readers can pretty well open the book to any page and read from there. The book is broken into dozens of vignettes, most of which run no more than a few pages. True, it’s more enjoyable to follow Levine’s tale from beginning to end (well, end of the decade, at least), but The Me Generation works well as a series of quick, episodic reads as well.

It’s a bit sad in the 21st century to realize that a worthy book such as The Me Generation…By Me couldn’t find a publisher. (At least that’s the assumption I’m making about this self-published tome.) A writer with an established name and reputation has a good story to tell; in previous years, a book deal would have been a distinct possibility, if not a foregone conclusion. Well, there I go getting all nostalgic for days gone by. If you’ll pardon me, I’m off to write my own book about growing up in…the 70s. (Not really, but I am working on a book.)