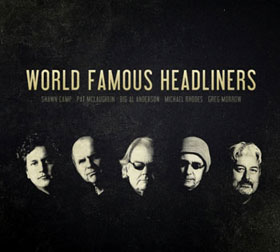 For twenty-plus years, Al Anderson was the guitarist in critics-darlings NRBQ. Though no longer a member of that band, Anderson has returned for occasional reunion projects and shows. But his focus these days is on his own band – his first since leaving NRBQ, The World Famous Headliners. The wryly-named group isn’t filled with household names, but it does feature Nashville-based players with impressive résumés. Multi-instrumentalist Shawn Camp, guitarist Pat McLaughlin, bassist Michael Rhodes and drummer Greg Morrow all have well-deserved reputations in the music business mostly (though not exclusively) within the country idiom. But the music on the group’s self-titled debut leans toward rock’roll with a c&w bent.

There’s a loose and smirky feel to the songs. To wit: the vocalized backing on “Give Your Love to Me” is the sound of a bunch of guys who wanted a horn section but couldn’t round up the cash to rent one. Anderson’s expressive guitar work is all over the record, but it feels more like a band effort than a guitar showcase. “Mamarita” feels like Los Lobos, and the stacked lead vocal harmonies on “Can I” and “Heart of Gold” are absolutely ear candy.