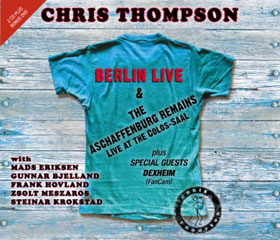 Manfred Mann’s Earth Band were not among the most high-visibility of 70s rock bands. There were any number of reasons for this, few having to do with the quality (and commercial appeal) of their music. The band’s namesake was a non-singing, South African keyboardist who played sitting down. And the band’s biggest hits were penned by others (Bruce Springsteen‘s “Blinded by the Light” and “Spirits in the Night,” Bob Dylan‘s “You Angel You,” Mike Heron‘s “Don’t Kill It Carol,” The Police‘s “Demolition Man”). And – not wholly dissimilar to The Alan Parsons Project, anther very good-but-anonymous band of the era – they went through a succession of lead vocalists.

That said, rapsy-piped Chris Thompson did front the Earth Band during its most successful run (and for two stints thereafter), so to the extent that any voice is associated with the group it does tend to be his. And that’s certainly highlighted on a new 2CD+DVD set from Thompson titled Berlin Live & Live at the Colos-Sal. Unlike some of these sorts of packages, the DVD isn’t an audiovisual version of the CD;. The pair of CDs document a June 2011 live show done for Radio Berlin. Thompson and his band (four German and/or European players) run through all of the hits (and near-hits) from the Earth Band, using arrangements that don’t stray too far from the original versions. Fans of Manfred Mann‘s playing style (he’s not present here, of course) will be pleased to know that the keyboards are prominent in the mix. One’s enjoyment of the package will be determined to a large extent by how much one likes Thompson’s voice: it’s equal parts rasp and vibrato. Very “rock’n’roll” to be sure, but some will surely find it grating. Still, a version of the Manfred Mann (not Earth Band) hit cover of Dylan’s “Mighty Quinn” balances arena rock and a gospel flavor, resulting in a rousing rendition.

The audio track listing is well out-of-whack with respect to what;’s on the disc, and the package’s booklet devotes a full quarter of its space to name-checking literally hundreds of (German) people

The DVD documents an abbreviated edit of a pair of dates from January 2011 (the liner notes explain that the rest of the video was unusable).. The seven songs that remain aren’t perhaps the ones most would pick, but they are supplemented by some “fan cam” clips of “Mighty Quinn” and “You Angel You.” Overall, it’s an entertaining package for whatever segment of today’s CD/DVD-buying market enjoys Thompson’s brand of classic rock.