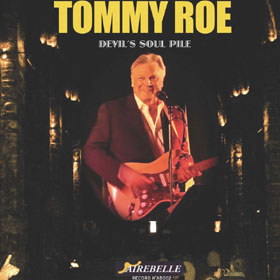 When you hear Tommy Roe‘s name, you can’t help but remember “Dizzy” and/or “Sheila,” two of his hits from the 1960s. And that was a long time ago. His latest, Devil’s Soul Pile (huh?) is a breezy, pleasant midtempo affair that serves to remind fans that he’s still creating new material, rather than (only) working the nostalgia circuit.

By definition, Devil’s Soul Pile is a somewhat musically anonymous affair: there are no musician credits, other than Roe’s liner note message thanking “all the engineers, singers and musicians.” I could tell you that the album was recorded in Nashville, but a few seconds of listening would have told you the very same thing. Not a note is out of place; whether that’s a good or bad thing is up to the listener. But in contrast to the music, the lyrical subject matter on most all of the songs has a nicely personal bent: not so much as to make one squirm, but Roe definitely scores points for aiming for what’s real and true. And on “Without Her,” Roe suggests a sort of Nashville version of The Raspberries at their most sentimental.