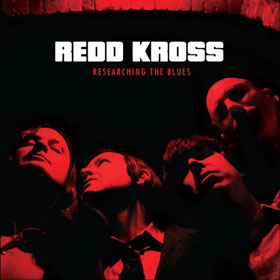 Leave it to the bratty (though now fortyish-plus) McDonald brothers to title an album Researching the Blues. Anyone familiar with their musical approach – perhaps best described as pop-punk yet having nearly nothing in common with all the crappy bands that claim that title. There may not be anything here that’s quite as candyfloss-accessible as “Bubblegum Factory,” but it’s a solid album that still beats most of what’s out there in terms of entertainment value. The title track’s insistent verses have an up-close production value that is reminiscent of some of the group’s earliest work, but when the chorus kicks in, that Phase Shifter arena-rock vibe comes roaring back in a big way.

The characteristic that has always set Redd Kross apart from other superficially-similar bands is a knack for crafting memorable melodies, and wrapping them in arrangements full of spikes and barbed-wire. Those qualities are in ample supply here, from the sha-la-la backing vocals on “Stay Away from Downtown” to the swing and swagger of “Uglier.” The smart-ass detachment of the old days is dialed back a bit in favor of a more, shall we say, commercial attitude, but there’s plenty here to delight those who loved the group’s earlier work.