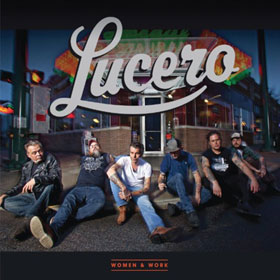 There comes a point at which labels become useless. Early on – in the sixties, I guess, maybe earlier – music critics and other sage souls coined various terms to describe the various styles (and sub-styles) of music. Folk-rock, jazz-rock, heavy metal…you know the drill. Over time those definitions have both calcified and expanded; both of those opposite-moving changes have served to render the labels more and more meaningless.

I’m reminded of this fact as I spin Women & Work, the eighth album from Memphis-based Lucero. Nominally alt-country (or somesuch), the music on Women & Work is actually pretty tough to pin down. There are plenty of cues that suggest a relatively straightforward modern c&w outing: the album title’s telegraphing of regular-guyness, the album packaging (the inner sleeve has a lyric-snippet caption, “I know the last time we drank I was less than behaved,” a memorable line from “On My Way Downtown”) and the tees-n-tats photos of the band members.

But while those superficial cues might draw in a certain market segment, they’re (to some extent) red herrings. Women & Work does have plenty of the elements that attract that audience: lyrics that focus on middle-class concerns, catchy melodies, southern accents on the vocals, pedal steel guitar, etc. – but other qualities serve to open things up a good bit. The beefy horn charts and trilling barroom piano on the title track have a flavor that suggests three Midwestern cities all at once: Chicago, Memphis and New Orleans. And you can rarely go wrong drawing influence from the musical traditions of those locales.

Case in point: “Juniper” has a boot-scootin’ vibe that is sure to get people dancing, but its walking bass line, punchy brass and insistent guitar riffing have far more in common with Chicago blues than most alt-country. The vocal textures throughout the album favor John Hiatt and Tom Waits, and on tracks like “I Can’t Stand to Leave You,” there’s barely a trace of country flavor at all; it’s closer to mid-American music along the lines of John Mellencamp, taking its influence more from Bruce Springsteen than, say, any number of all-hat-no-cattle Nashville types. Lucero’s vibe also reminds this reviewer of Missourian songwriter Randy Wooten, leader of the criminally overlooked (and now defunct) Randy & the Bloody Lovelies.

In short, Women & Work deftly navigates the space between modern c&w and mainstream rock, and in the process comes up with an album that should please fans of either style. At this writing Lucero are in the midst of a 25-date swing across the USA; readers in my neck of the woods (Asheville NC) have a unique opportunity to see the band live onstage for free at the annual Bele Chere Festival, July 27-29 (check the festival’s web site for specific performance time).