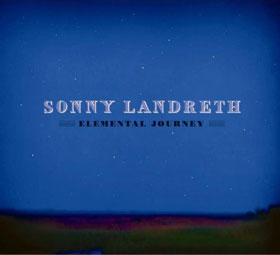 When genre labels get applied, guitarist Sonny Landreth is often put into a blues (and sometimes Americana) bag. But a listen to Elemental Journey, his twelfth and latest album makes the strong case that his mastery of styles is far too weighty to be contained in those (already wide) categories. Even before reading the liner notes, I immediately heard a musical kinship with some serious shredders: specifically Joe Satriani and Eric Johnson. Their individual approaches – serious fleet-fingered, borderline-showy prowess coupled with a resolute commitment to hooks and melody – have much in common with the eleven instrumental tracks on Elemental Journey.

So I suppose it should come as little surprise to discover that Satriani and Johnson actually guest on the record. Satch trades licks with Landreth on the opener “Gaia Tribe,” and Johnson lends his atmospheric and assertive axework to “Passionola.” But the presence of these hotshot axe-wielders should not be interpreted as a commercial gambit on Landreth’s part: he can – and does – carry the album on the strength of his own fretwork. His peers merely add another dimension to an already fine album.

For this listener, instrumental albums stand or fall on the strength of the melodies. No amount of fretboard wizardry — no amount of technical mastery – can sustain interest if the melodies aren’t sturdy. And whether he’s serving up a chicken-pluckin’ slide guitar fest like “For You and Forever,” the bouncy pop of “Wonderide,” the blues-meets-reggae of “”Forgotten Story,”or the languid vibe of “Letting Go,” there’s a balance of hot-shit playing, tasteful restraint, and that ever-present melodic sense. And for shredding fans, on “Reckless Beauty,” Landreth pulls out all the stops and puts on a dazzling display of here’s-how-fast-I-can-play.

“For You and Forever” also features some lovely string section work courtesy of members of the Acadiana Symphony Orchestra performing Sam Broussard‘s arrangements. The album closer “Opening Sky” sets more sweeping, emotionally-charged orchestral backing to Landreth’s romantic slide leads. And the way Landreth puts the songs together allows his players – David Ranson on bass, Steve Conn on keys and (depending on the track) one of three drummers – plenty of space to show off their abilities. Easily on a par with Satriani’s Surfing with the Alien and Eric Johnson’s Tones, Elemental Journey is a winner.