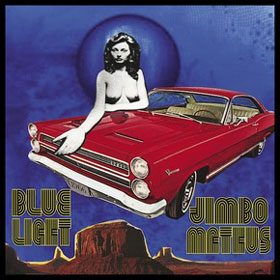 Musically, the 1990s were an eclectic time. You had all sorts of strains of music showing up on the pop cultural landscape. One of the more outré ones (commercially speaking, at least) was the modern take on Martin Denny and Esquivel-styled space-age bachelor pad music and/or exotica, most notably in the form of Combustible Edison, a group named after a cocktail.

Another quirky style was embodied in a group called Squirrel Nut Zippers (named after a candy bar). Their angle (or USP/unique selling proposition, as we called it in in business school) was a modern take on prewar jazz. (And by pre-war, I mean pre WWII.) The group’s hit “Hell” was everywhere on the radio in 1997. And like millions of others, I was taken in by the quirky, odd-yet-familiar vibe of the song.

At least the first few hundred times I heard it, I was. Truth be told, the song – catchy as it is – veers perilously close to novelty status, sort of a 90s corollary to “Winchester Cathedral.” It’s better than that, of course, but it lost its charms on repeated spins. They certainly got points with me for their outside-the-box approach, but in the end, unconventional does not always equal consistently entertaining.

The rest of the album was both truer to the 1920s-30s jazz aesthetic and less interesting. I for one found a few of the group’s characteristics vaguely annoying. Chief among these was Katharine Whalen‘s musical pose: she seemed convinced she was Billie Holiday with a banjo. I like Billie Holiday fine (banjos not so much) but we already have one of those on record, thank you. Long story short, after “Hell” I was pretty well finished with the Squirrel Nut Zippers.

So when in 2012 I heard that Jimbo Mathus (Squirrel Nut Zippers co-leader with Whalen) had a new solo EP called Blue Light, my initial reaction was “meh.” But on the strength of a recommendation by a friend whose musical taste I trust to an unusually (for me) high degree, I decided to give Blue Light a spin. Thank goodness I did.

When the title track kicks off, it’s a spare, almost painfully-slow country number. But Kell Kellum‘s keening pedal steel guitar draws the listener in. And then the full band kicks in. The result has the feel of Delaney & Bonnie crossed with a laid-back CCR. The song itself is essentially a classic pop structured tune with a country-rock arrangement. As it unfolds there are hints of The Band, the Allman Brothers (especially in the song’s highly melodic but judiciously-applied dual-lead guitar work), and early 70s Rolling Stones at their most country-flavored. The song winds on for five-plus minutes, but when it’s over, you’re disappointed there’s not more; it’s that appealing.

“Ain’ Feeling It” launches with a heavily vibratoed Wurlitzer electric piano. The song has a late-night smoky club vibe, with shades of Leon Russell, Stax/Volt and even a bit of Curtis Mayfield. It’s a subtle slow jam with a highly catchy hook line.

“Haunted John” is a wholly different animal. Imagine if The Stooges went to Sun or Ardent and brought in the Memphis Horns. A tasty mix of garage and soul, the sound wraps around a hypnotic riff, and rides right along on the edge of mayhem. Brilliant, and again over to soon. But keeping ’em wanting more is a tried, true and artistically valid approach, one Mathus applies throughout Blue Light.

“Fucked Up World” crosses the Stones vibe (without the country angle) with something a bit like dissolute late-period Big Star; it’s a tighter take on the sort of sounds Alex Chilton gave us on the elegantly flawed Bach’s Bottom.

It’s Stax/Volt time again on “Shackles and Chains.” It’s an uptempo blues with an organ sound straight out of Sam the Sham & the Pharaohs, and on lead guitar, Mathus channels his inner Steve Cropper.

The EP closes with a slab of honky-tonk in the form of the aptly-named “Burn the Honky Tonk.” Here Mathus sings like he’s the long-lost son of George Jones. Kellum’s moaning pedal steel sets the perfect lonesome vibe, alongside some deliciously rickety-sounding tack piano from Eric Carlton. And to maximum effect, drummer Ryan Rogers ably guides the band through the retarding tempi at the end of each chorus.

Where Squirrel Nut Zippers always came off to me – rightly or wrongly – as smacking of musical dilettantism, the sounds on Blue Light feel wholly authentic to my ears. Highly recommended, especially in its 10” clear blue vinyl configuration (the sleeve contains an MP3 download card as well).