Bill Kopp: As far as new material – and, I guess, specific to the original songs on Hot Tuna‘s Steady As She Goes — do you tend to road-test the songs, develop them onstage and then refine them in the studio, or the other way around? Since you just told me you cut the album in ten days or so, I’m assuming you did road-test them. 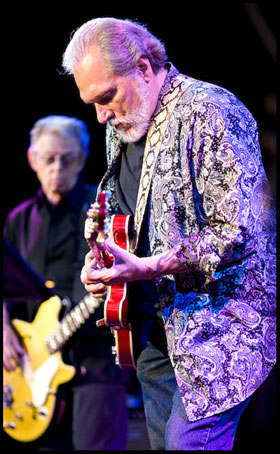 Jorma Kaukonen: In a perfect world, the answer would be yes. But I think the only one we did that with was “Things That Might Have Been,” because I wrote that a couple years before. To be honest, I had the ideas for some of the others sort of percolating.

But I’m one of these guys…every now and then I teach creative songwriting. And I say, “Look. I have some distinct ideas on how this should work. The advice I’m going to give you, I mostly never take myself.” I have a lot of friends – guys like Jim Lauderdale, Guy Clark – who write songs for other people. They write every day. All the time. And that’s why they’re as good as they are.

So most of the songs on the album we didn’t actually road-test them. And I suppose there’s a good and a bad aspect to that, too. Because if you come up with an arrangement that you play on the road, and then you get some other creative ideas when you’re in the studio, for me – because my memory reflexes are so strong – it’s tough breaking old habits to put new ones in place.

Working with a guy like [producer] Larry Campbell – here’s a guy who plays all these instruments real well – I just play guitar, so my relationship with the music is just my voice and the guitar. But with Larry, he’s got this music in his heart. And he uses all these instruments to express that. So it’s not, in my opinion, as if the instrument comes first. So when we do a song like “If This is Love, I Want My Money Back,” we did it differently live. But he had these ideas, and he threw these cute hooks in there. And I’ll tell you: it was tough learning to play it the new way, with those licks.

When you work with the guys I work with, we bust each others’ balls relentlessly. So when you make a mistake, they’ll say, “You call that a solo?” So we put a lot of pressure – good pressure – on ourselves to get things done right.

BK: What differences (if any) do you observe between playing live in the 21st century and the way you did it back in the 60s and 70s? I;’m not thinking so much of the PA systems or the touring; more of the general feel of preparing for and doing live dates themselves.

JK: Unfortunately, because all of the Hot Tuna members live so far apart, we don’t get as much rehearsal time as we’d like. I would love to have rehearsal time before we do a tour. That’s the bad news.

The good news is that we’ve been doing this for such a long time that – in my opinion – it doesn’t take us more than a job or two to get us back in the zone that we need to be in. But along with that sort of tentativeness that might occur at the first couple jobs of a tour, there’s a kind of excitement. Because you don’t know what’s going to happen. The parts aren’t drilled into ya, y’know?

I think our basic concept of music these days is –I’m not sure this is quite the word I’m looking for – a little more inclusive than it used to be. But we still try to keep our minds open to when things happen by mistake. Things that might be really good. 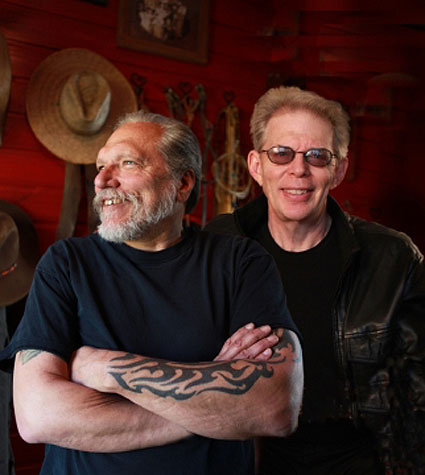 BK: So many bands break up, re-form, etc. To what do you attribute the longevity, the success of your musical partnership with Jack Casady?

JK: Friendship and respect. Jack is my oldest buddy; we first started playing together in ’58. You know: you’ve talked to Jack, you’re talking to me. We’re really different guys. But we’ve always respected each others’ world views, our outlooks, and the way we approach music.

Jack is much more intellectual about music than I am. He’s more vocal about the way he does things than he was back in the day. He’s a thinker; he thinks everything out. But you wanna know something? He’s a bass player. He’s gotta be that way. Bass players and drummers, they don’t get to fool around. If you go into a music store, you’re not going to find an instructional book called 101 Fun Strums on the Bass. For guitar, there’s a million books like that. But for bass, you’ve got to learn to play music.

Hot Tuna will perform (in the band’s acoustic configuration) at the Diana Wortham Theatre in Asheville NC on Wednesday, July 11. – bk