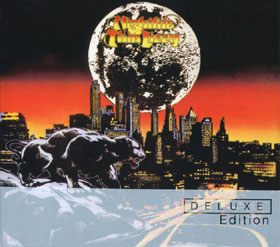 Quick: When I mention the band Thin Lizzy, what’s the first song that comes to mind? “The Boys Are Back in Town,” right? Okay. The next song? “Jailbreak.” But both of those songs are on one album, the group’s Jailbreak LP. Those among you who are more well-versed in the Irish band’s out put might have answered “Whiskey in the Jar,” an early hit. But nearly everyone will have thought of these three songs first.

Jailbreak is rightly lauded as the band’s best album, and in fact one of the best albums of the entire rocking 1970s. But 1976’s Jailbreak was Thin Lizzy’s sixth LP. And with few exceptions, rock bands don’t simply create enduring works right out of the gate. So anyone who enjoys Jailbreak ought to consider checking out the group’s other albums; with Jailbreak being so great, the others must have redeeming qualities, right?

Indeed they do, and more. In fact, Nightlife, released in 1974, features the same personnel as the more well-known hit album. The twin-lead-guitar attack of Brian Downey and Scott Gorham had just been put in place during sessions for Nightlife. That said, Nightlife is a very different album from Jailbreak. It represents a wholly different musical direction for the band, one which – rather than continuing with – Thin Lizzy would fold into its overall bag of musical tricks. A soulful, subdued and sexy album, Nightlife owes more to Van Morrison than it does to Bruce Springsteen (those being two large-looming influences upon Thin Lizzy’s leader/vocalist/songwriter/bassist Phil Lynott).

The album kicks off with “She Knows,” a largely acoustic-guitar driven rocker that benefits form some close harmonies on the chorus and some tasty guitar work running under that chorus. The title track is something else altogether: highly evocative of the end of a long night’s gig, one can almost see the upended bar stools on tables, smell the stale beer and cigarettes. The band is tight and forceful, yet highly restrained in its delivery of this blues. And the string arrangement – an adornment of the sort one might not expect on a Thin Lizzy LP – adds a thrilling layer to this sultry number; it’s possibly the best thing in this song with many things to recommend it.

In the same way that Pink Floyd produced the relatively low-key and overlooked Obscured by Clouds several months before Dark Side of the Moon, Thin Lizzy’s Nightlife telegraphs some – but not all – of the strengths that their blockbuster release would feature. The brief “It’s Only Money” is a riff-heavy rocker that presages Jailbreak. And its moralistic theme is one to which Lynott would often return.

Another low-key number, “Still in Love With You” owes as much to American soul as it does to any rock forms. The band’s melodramatic (in a good way) arrangement – particularly the guitar solos – works as well in this understated format as it would in highly-charged rockers. Though gone from Thin Lizzy part-way through the album sessions, lead guitarist Gary Moore turns in an amazing solo. And Frankie Miller‘s duet vocal adds a texture that no amount of ace Lynott overdubs could have given the song.

Lynott’s writing style often sketched musical portraits of characters, and Nightlife includes several of these. “Frankie Carroll” is built around piano and string arrangement, but at just two minutes, it’s a tad underdeveloped lyrically. The streetwise vibe of “Showdown” owes much to Isaac Hayes and David Essex; it’s yet another low-key storyteller; the tune could be seen as chronicling the adventures in which the “boys” engaged before they left and returned to town after their Jailbreak. Female backing vocals – something else you don’t often think of when it comes to Thin Lizzy – fit perfectly on this number.

“Banshee” is another rarity in the Thin Lizzy canon: an instrumental. Built around the twin-lead-guitar approach, it has a vaguely country-and-western feeling, but its transcendent melody – aided in part by acoustic guitar and organ – leaves the listener begging for more. That twin lead returns on “Philomena,” another Lynott story-song. Laying on a thick Irish brogue, the singer weaves his tale; this song sounds perhaps the most like the material on Jailbreak. Well, unless one considers “Sha La La,” a menacing riff-fest. The lyrics almost don’t matter here: it’s all about the guitars, and they’re all over the place.

Nightlife wraps up with another understated number, “Dear Heart.” Featuring Lynott’s quiet, contemplative vocals backed by acoustic and electric pianos, it closes the album by reinforcing that late-night feel while delivering a story. All of the album’s strengths are on display here: a tasty and highly memorable string arrangement, lovely lead guitar work, and carefully-applied harmony vocals. They all add up to the perfect closer for an album with Nightlife‘s personality.

The 2012 Deluxe Edition includes a bonus disc that features live-on-the-radio versions from the John Peel and Bob Harris shows. AS is typical when it came to Thin Lizzy, these live versions have an immediacy and a lack of filigree which renders them looser, simpler and more direct than their studio counterparts. Different enough from the official versions, they’re essential for anyone who enjoys the Nightlife album proper. Some additional alternate versions from the Nightlife album sessions put subtle arrangement tweaks on display. Of particular interest are a mercifully longer take of “Banshee” and a much-longer version of “Still in Love With You.”

The band would largely disown Nightlife, viewing it as too low-key. Yet on subsequent tours – as documented on the Live and Dangerous LP, one of the era’s finest live albums – Thin Lizzy included two Nighlife numbers as part of their set. “Still in Love With You” and “Sha La La” rank among Nightlife‘s finest moments, and the songs are well-served by being included on the live set.

Anyone who enjoys Jailbreak really should take the time to get to know another complementary side of Thin Lizzy as presented on Nightlife.