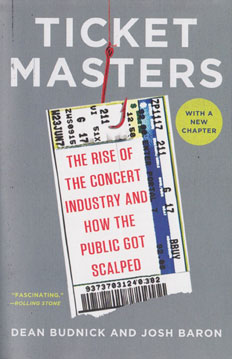 Every now and then, I’ll find myself engaged in a conversation with someone who laments the fact that “they don’t make movies like they used to.” In the old days, the argument goes, they had good guys and bad guys, and you usually knew who was which. Sure, there might be a plot twist where a supposedly white-hat character is revealed to be a villain, or a redemptive moment in which a villain makes a turn toward the good. Many modern films, the argument continues, have few or no redeemable characters. Antiheroes, maybe.

One could argue that in many ways that shift represents a truer depiction of life, at least within some contexts. I’m reminded of this as I work my way through the book Ticket Masters: The Rise of the Concert Industry and How the Public Got Scalped. This staggeringly well-researched tome by Dean Budnick and Josh Baron sets out to cover the entire history of concert ticketing, and while it’s an engrossing story, it’s not a pretty one.

Those readers who attended concerts in the 70s will recognize many of the names and outfits in Ticket Masters‘ early pages: Alex Cooley, Jerry Weintraub, S.E.A.T.S, Bill Graham, Cellar Door Productions. Early on, a number of entrepreneurial types got into the ticketing game, and some of them even did so with relatively lofty goals. Some (not many) of these men and women truly wanted to level the playing field, as it were, for fans attempting to secure seats at shows. But in nearly every case, those idealistic young people eventually went over to the dark side, or were co-opted into the system. As Ticket Masters chronicles in astounding detail, the history of ticketing is one of mergers, acquisitions, lawsuits, betrayal, maneuvering, regret, recrimination and…higher and higher ticket prices. The book could just as well have been titled Welcome to the Machine.

Ticket Masters elucidates a point that may seem counter-intuitive: the ticketing business is unique in that competition has the effect of raising – not lowering – prices. And the entire concept of who-is-the-customer figures into the mix as well: it’s not merely a cases of shareholders vs. consumers (though that dynamic does exist, and as you might guess, the shareholders come out on top). No, it’s more often than not down to the idea that concert venues and ticketing companies view each other as the customer. And neither has anything like artistic goals; it’s all about the dollar, about maximizing revenues. The ticketing industry story is one of unfettered Gordon Gekko-styled corporate greed; as such it’s not altogether shocking that one Mitt Romney even plays a minor (yet key) role in the story.

Which isn’t to say that the performing acts mentioned in Ticket Masters come out looking good. With precious few exceptions, they do not. While Jimmy Buffett and Rod Stewart are singled out for their especially greedy practices, the list of artists willing to (in this reader’s opinion) screw over the fans for a few more bucks is dismayingly long and familiar. Said list probably contains several of your favorite acts. (It certainly does mine.) The only artists (or artist’s organizations/management) who earn anything approaching a white hat are the String Cheese Incident and – no surprise here – The Grateful Dead. Even Pearl Jam‘s highly publicized battle against Ticketmaster is described in a way that calls into question the band’s motives for their fight.

If you’re at all familiar with two books of investigative journalism from the modern era – the Pulitzer Prize-winning America: What Happened? and Eric Schlosser‘s Fast Food Nation – then you know what good, solid journalism can do to tell a tale worth telling. In Ticket Masters, Budnick and Baron have crafted a work every bit the equal of those books. True, it does wander into the weeds on several occasions — explaining the intricacies of software development, sketching out the relationship between brokers (where I’m from we called ’em scalpers) and “primary ticketers” – but these detailed explanations are essential to a full understanding of the story as a whole.

The authors do an admirable job or researching both (or multiple) sides of each issue, and their agenda – if any – is clearly only to get the story right. There’s no self-aggrandizing “In our extensive research, we discovered…” or any such thing; the authors tell the story, based on literally hundreds of interviews, but they themselves remain absent from the story itself.

Ticket Masters is a dense volume; perhaps not poolside reading. But it’s a page-turner in the tradition of the best fiction, and it pulls back the filthy rug of the industry to reveal the bug infestation under it. You won’t like what you learn reading Ticket Masters, but you’ll be a better-informed consumer for knowing. You’ll still pay too much for most concerts, but at least you will have a clearer idea why it is so. Ticket Masters is recommended in the highest terms for anyone who wants to know how and why things really work in the ticketing industry.